It's a wrap for Kangana Ranaut's Manikarnika

A change in cast, exhausting schedules and reshooting, Kangana Ranaut has survived the odds. She wrapped up the schedule in 45 days despite ill health 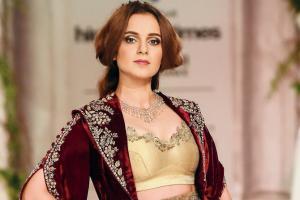 
Kangana Ranaut can heave a sigh of relief. Despite the controversies surrounding Manikarnika: The Queen of Jhansi, she has managed to wrap up the historical. On Friday, the final scene of the biopic was shot. Kangana took over the project after director Krishna Jagarlamudi took off to direct the NTR biopic. A change in cast, exhausting schedules and reshooting, Kangana has survived the odds. She wrapped up the schedule in 45 days despite ill health.

The movie has been in the midst of a controversy ever since the news of Kangana stepping in behind the camera for it emerged. Following which, actor Sonu Sood had walked out of the film owing to his professional commitment towards "Simmba". However, Kangana hit back at him, claiming he left the movie as he "refused to work under a woman director". On his part, Sonu has denied this.

"Kangana is a dear friend and she will always remain one but this constant playing the woman card, the victim card and making this entire issue about male chauvinism is ridiculous," Sonu said in a statement.

"The gender of the director is not the issue. Competence is. Let's not confuse the two. I have worked with Farah Khan who is a competent woman director and Farah and I had a great professional equation and we are still best of friends. That's all I would like to say," he added.

Actress Swati Semwal had also quit the project as she was unsure if her role would have been substantial enough following Sonu's exit from the movie.

However, Kangana remains unaffected with the development. In a recent interview, the actress said that she was proud of Manikarnikaaut says she is proud of "Manikarnika: The Queen of Jhansi", and is looking forward to its release.

"I am extremely proud of this film, portraying a character who empowers and inspires. We have put in our heart, blood and sweat into making this film," Kangana said.

Produced by Zee Studios and Kamal Jain, Manikarnika is slated to release on January 25, 2019. The teaser will be released on Gandhi Jayanti, October 2.