The film also stars Sikander Kher in a negative role. "Romeo Akbar Walter" is directed by Robbie Grewal. Other details of the film have not been shared 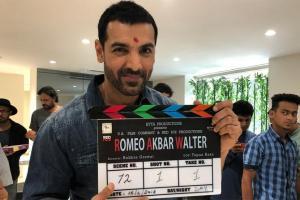 
Actor John Abraham has started shooting for his upcoming film "Romeo Akbar Walter". John on Friday tweeted: "And the journey begins! 'RAW' 'Romeo Akbar Walter." The actor had told IANS that the movie is his "most challenging role to date" and that he was nervous getting into it.

The film also stars Sikander Kher in a negative role. "Romeo Akbar Walter" is directed by Robbie Grewal. Other details of the film have not been shared. Earlier, actor Sushant Singh Rajput was roped in for the title role in the film, but the makers of the movie mutually parted ways with the actor due to "unavoidable circumstances". John is fresh from the success of "Parmanu - The Story of Pokhran", his home production which is inching close to the Rs 60 crore mark.

Next Story : Alia Bhatt: Shaheen has battled and lived with depression since she was 12