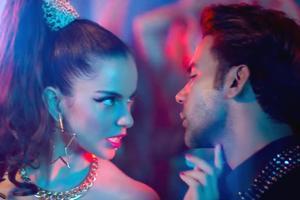 
Kangana Ranaut and Rajkummar Rao released their new song 'Wakhra Swag' which is a remix version of the previous version of the song, for their upcoming film, Judgementall Hai Kya. The song is sung by Navv Inder and Lisa Mishra. American-Indian rapper Raja Kumari has also lent her voice in the remake. The song has been remade by Tanishk Bagchi and Bosco Martis has done the choreography.

Reacting to Kangana's look in the song, her fans left positive messages in the comments section of the post. "Beyonce + Rihanna = Kangna ka avatar," wrote one fan. "Too many bombs dropping today!" wrote another.

Check out the song right away!

Kangana said that Producer Ekta Kapoor had a clear vision of what the number should be. "I'm not used to being a part of a promotional video, I don't like to do them, but because Ekta Kapoor has a certain vision for the marketing, I was up for it. This is not just a disco number but has a theme to it wherein both, Rajkummar and I take on each other. There was a story here and it was relevant to the narrative." Rajkummar added, "Kangana and I together in a song is something nobody has seen before and I have to say designer Sheetal Sharma has done a fab job with the styling."

Talking about the film, the title was earlier Mental Hai Kya. However, the film attracted controversy due to its title. Here's the official statement from the makers: "Given the sensitivity attached to the issue of mental health and our intention of not offending or hurting anyone's sentiments, the makers have decided to change the title of the film Mental Hai Kya to 'Judgementall Hai Kya'. Both Kangana and Rajkummar have outdone themselves in this thriller and we can't wait for audiences to witness it on the big screen. CBFC has cleared the film with U/A certification with minor changes, which the makers are happy to comply with. With the CBFC clearance, the film is all set to release on July 26th."

Next Story : Ramayana to be made in a trilogy with a massive budget of Rs 500 crores