The flop movie playing in the hall is Kalank. And I just wondered for a sec what this father might feel, about a lookalike of his son, playing the hero in the film that he’s taken him to watch 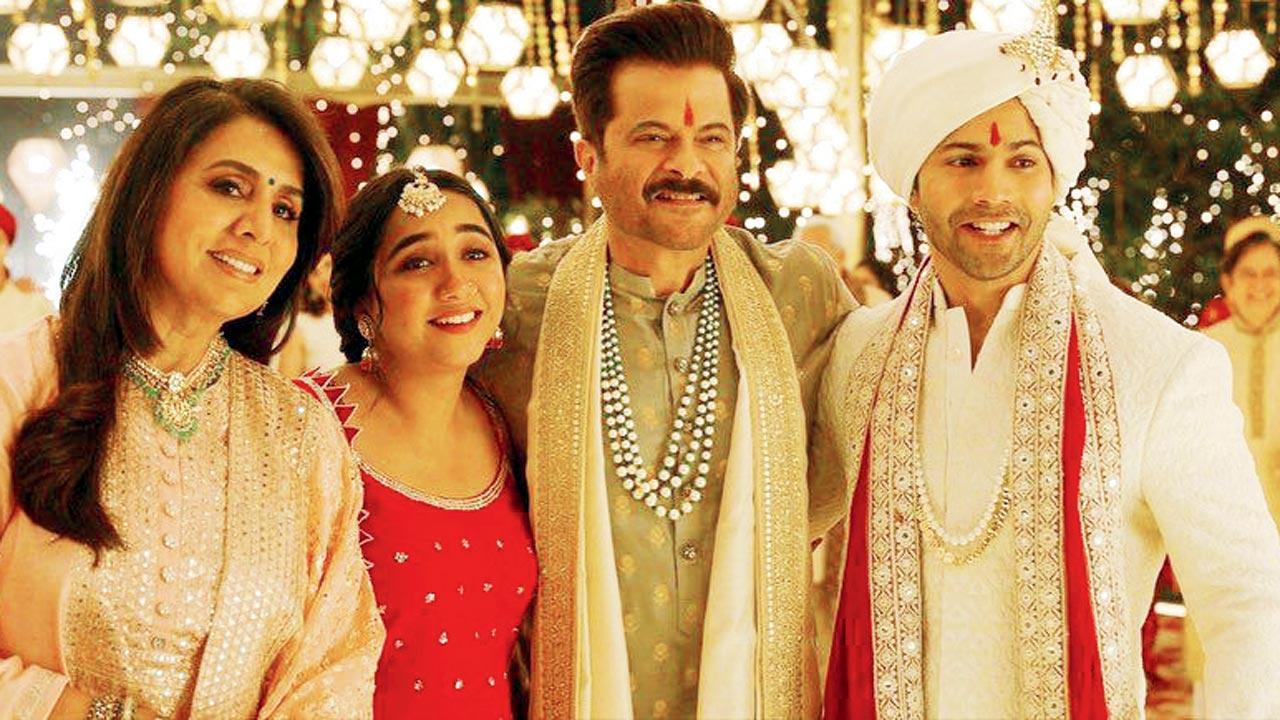 This film is what you’d call the quintessential ‘family entertainer’, to be watched by the desi family-unit, boodhe, bachche, jawan — not necessarily in separate corners of the cinema hall. And yet the theme is totally adult. In the sense that it deals with divorce and infidelity, old-age infatuation, and young-love destroyed.

The treatment may well be that of a sex comedy. And yet at no point does the picture feel cheap-assed, salacious, even with lines on ‘tharak’ (horniness) — never devolving into a Dil Ka Doctor type sex farce. This probably has a lot to do with the director (Raj Mehta), and the camera’s gaze.

It’s also the story of a father and son — both of whom are simultaneously seeking divorce from their wives. The father, at a pivotal scene in this picture, takes his son along to a movie theatre, to reveal something of utmost importance. The hall is empty.

The flop movie playing in the hall is Kalank. And I just wondered for a sec what this father might feel, about a lookalike of his son, playing the hero in the film that he’s taken him to watch!

Anil Kapoor plays the dad. His son is Varun Dhawan, the lead in Kalank, right? This is of course a self-referential/meta moment in this movie. Like Kalank, Jugjugg Jeeyo is a Dharma production, perhaps their first theatrical release since the pandemic. They premiered even a full-on war movie (Shershaah), and one headlined by
Deepika Padukone (Gehraiyaan), directly on OTT, right before this.

In that vein, this is designed as a pretty, paisa-vasool kinda massy entertainer. To what extent is it inclusive/exciting enough to draw in crowds nationally, of course, is none of our business, as regular viewers.

In a very ‘Govinda’ way that comes so naturally to him, Dhawan plays a callow fellow called Kuku, a bouncer at a nightclub. He perennially waits to get wasted (or otherwise), before breaking into long dialogue-baazi, only when he’s in public, at a courtroom, or a wedding banquet!

The Deepika-like luminous, but altogether reserved, Kiara Advani, is his wife in a loveless marriage, while the couple must pretend things are fine between them — for the family they’re visiting back home over a big, fat, desi wedding.

The story starts off in Patiala, heads over to ‘Kanayda’, and back to Patiala, for multiple pegs of rich, urban Punjab. For, what is the biggest subset of Bollywood, if not Punjabi-regional going mainstream — the other subset lately comprising the Uttar Pradesh small-town movies, no?

Between the two, Punjabi drunken fun is obviously far more viscerally entertaining — fellows yelling ‘hadippa’ for a background score, the soundtrack comprising every Punjabi genre, from hip-hop, dance, even bhajan, to the semi-classical ‘tappa’ — between gags, after gags.

Really, what’s there not to love in a film going back to basics, or ‘Bollywood’, as it were. What do I mean by that, essentially? Foremost, the music, as you can tell.

It’s been a while since we simply tapped feet in a theatre, pretty much all through. I don’t get why Bollywood soundtracks aren’t heavily promoted as they used to be in the past — so you don’t have to discover tracks, along with a movie. I know the fairly average dance number ‘Naach Punjaban’ here is originally by the Pakistani, Abrar Ul Haq.

But since you might miss it, let me call your attention to the superior, slow, sombre song, ‘Tum jo gaye’ within the first 20 minutes of this film. Full disclosure: It’s composed by Pozy, one of Bombay’s best guitarists in the indie scene, and my childhood friend. Also the reason I’ve been humming it for almost a year. Glad it’s out.

Coming back to the picture per se, where everyone deliberately plays it up for the laughs — it’s really the interplay between the four lead characters that makes it work.

The warm, genteel Neetu Kapoor provides it the dramatic centre. Looking at her ace scenes with long passages, it’s a loss to humanity that we’re seeing her in a film after almost a decade, and that we lost her from the screen at her prime in the early ’80s.

The one more obviously overpowering this show, no points for guessing, is Anil Kapoor, 65, indisputably India’s youngest sexagenarian. If 60s, in his case, is indeed the new 40s — it’s not a surprise that a mid-life crisis must visit a character played by him in a film. Which is probably why he agreed to play a proper ‘Bollywood dad’!

It’s just that this is also such a fantastic plot-driven script (Rishabh Sharma), that it’s hard to accurately tell the motivations of characters, in terms of why they do, what they do — Anil’s is the hardest to get.

Should it have remained a cranked up, sex-com alone, and this dad would make more sense then? Maybe. Does the film seem too verbose at the same time, explaining itself on occasion? Surely.

Can you tell the twists beforehand, though? I couldn’t. Does the gag-fest work, pretty much all through then? Hell, yeah. Could so do with this frivolous, corny fluff, chuckling in a dark hall. Have missed this sorta stuff for long, man!

Next Story : Have you heard? RK’s double role debut