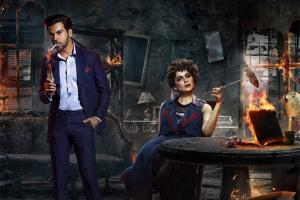 
With little over a month to go for the July 26 release of Mental Hai Kya, the makers were eyeing to kick off the run-up with the trailer launch today. However, mid-day has learnt that the event has been put on hold as the title of the Kangana Ranaut and Rajkummar Rao starrer remains a subject of contention. In a bid to find common ground, a meeting has been scheduled between producer Ekta Kapoor, members of the Central Board of Film Certification (CBFC) and the Indian Psychiatric Society (IPS) in the city today. On the agenda is a special screening of the trailer and a possible review of the title.

This development comes after the hearing at the Gujarat High Court yesterday. It may be recalled that the IPS had knocked on the High Court's door in May, alleging that the title of the Prakash Kovelamudi- directed thriller was "stigmatising, degrading and inhuman in projecting mental disorders and persons who suffer from mental disorders."

Confirming news of the meeting, advocate Kshitij Amin, who represents the censor board, reveals, "The producers submitted the trailer to the CBFC on June 11. The governing body [CBFC here] has decided to call for a meeting between the petitioner and the applicant. They will watch the trailer and decide further course of action. Since the discussion is likely to take place today, the court has adjourned the matter to next week."

Mitul Shelat, legal counsel for the IPS, says, "The matter is subjudice, so all I can say is that the CBFC has called for a meeting and the representatives of the IPS will be present."

Meanwhile, as Kapoor released a new motion poster yesterday, she reiterated that the thriller is sensitive towards the subject of mental illness. "The film doesn't marginalise the mental health community and the title doesn't intend to offend or disregard anyone's sentiments... The movie encourages you to celebrate your uniqueness," she wrote.

mid-day reached out to Balaji Motion Pictures, which remained unavailable for comment.

Next Story : 'I am under attack because Super 30 is being made on me'