On Thursday, Karan Johar wished luck to the Dear Comrade team and also clarified that no lead actors have been approached for its Hindi remake. 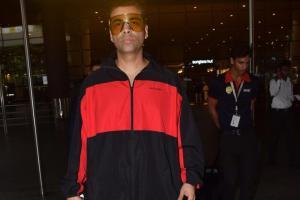 
A few days ago, south superstar Vijay Deverakonda of Arjun Reddy fame came to Mumbai to meet Karan Johar and show him his Telugu film, Dear Comrade, which releases on July 26. The filmmaker, after watching the film, was elated and loved the film to such an extent that he immediately announced the remake of its Hindi version. Since then, Johar has acquired the production rights of Dear Comrade, and rumour mills have been abuzz with news that the Dhadak stars Janhvi Kapoor and Ishaan Khatter have been roped in for the remake.

On Thursday, Karan Johar took to his Twitter account to wish all the luck and success to Dear Comrade. He wrote: "All the best and big success to the team of 'Dear Comrade' on July 26!" He also issued a clarification stating that no lead actors have been signed for the film yet. This is what he wrote: "Also a clarification! No lead actors have been considered or approached for the film as yet."

All the best and big success to the team of #DearComradeOnJuly26th ! Also a CLARIFICATION! No lead actors have been considered or approached for the film as yet! The planning for this lovely film is underway!

Johar also stated that the planning of this "lovely" film is underway. Karan Johar watched Dear Comrade on July 24.

This isn't Karan's first collaboration with a south film. He associated with SS Rajamouli's Bahubali as a distributor, and it changed the scenario for him and South Indian films in the mainstream Hindi film industry.

On the other hand, Vijay's Arjun Reddy has also been remade in Hindi as Kabir Singh. The film featured Shahid Kapoor in the titular role and Kiara Advani. Kabir Singh has turned out to be the highest grosser of 2019.

Next Story : Vaani Kapoor: I worked a lot on myself for War