Khandaani Shafakhana Movie Review: Shilpi Dasgupta's noble intention runs thin when the screenplay starts reducing sexual issues to jokes for quick giggles. The gaze is empathetic even though the protagonist starts off reluctantly. 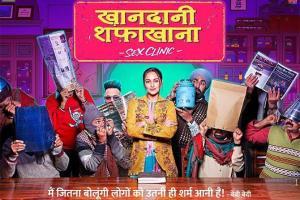 You have to give it to Sonakshi Sinha for being bold with her choice this time around. I specifically use the term bold because I have lost count of the number of times I have heard the word as a sheer cue to titillate the audience. Finally, we are in an era in Hindi movies when the term bold is regaining its right meaning. So Sinha's choice of subject is courageous. A woman named Baby, running a sex clinic, much against the wishes of her brethren is a refreshing premise with its thought and heart, both in the right place. Despite the land of the second largest population in the world, sex education and sex discussion are both fairly unheard of in this country. So 'Gupt Rog' as we colloquially refer to sexual dysfunctions, is how Mamaji (brilliant Kulbhushan Kharbanda) makes his living from. Director Shilpi Dasgupta does a steady job as a debutante director, carving out a story that critiques one too many hypocrisies the society is plagued with. It all starts when Mamaji is killed by a patient whose overactive sex drive is his problem.

The custody of the controversial clinic lands in the lap of Sonakshi Sinha, who plays Baby, entrusted with the responsibility of running the clinic for a minimum of six months.

Dasgupta's noble intention runs thin when the screenplay starts reducing sexual issues to jokes for quick giggles. The gaze is empathetic even though the protagonist starts off reluctantly, making her disgust evident. Having a woman at the helm of things gives the narrative a refreshing touch. Finally, Bollywood is willing to give Ayushmann Khurrana a break. But the jokes are far too many and none of them placed with a deeper motive of inspiring a conversation. Maybe the film at large eventually will, but it lacks in nuance.

The impact of the story runs down further when Dasgupta amps up the melodrama, leaving behind a gratuitous aftertaste about the structure. If it's a comedy, shouldn't the tonality remain largely homogenous? The heroine getting thrown out of her house is quite a dreadful plot stretch. Had it stuck to being simple, heartening and funny, the film would've worked better.

Watch the trailer of Khandaani Shafakhana:

What works, however, Badshah - an out and out hoot of a character. A pop star with erectile dysfunction refusing to help the clinic because it could compromise his image. There is so much to relish in his part alone - the idea of masculinity itself, the double standards of the tag et al. What Sonakshi's Baby lacks on paper, she makes up for with her sincerity. For a leading lady, the character comes off inconsistent on several counts, some of it even Sona can't cover. It's a trip to watch Varun Sharma but there's little more than his Choocha act of Fukrey that directors are exploring.

I see Dasgupta wanted to have a matured dialogue about sex without the hoopla of it but her story needed stronger legs to carry the weight of her vision.