Love Aaj Kal Movie Review: Seriously, what is this randomness?

All I could do, sitting in the front row, is fidget on my phone, and note down lines from Sara's character. Just to go with the randomness of it all. 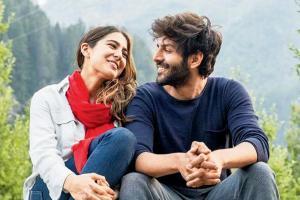 A still from Love Aaj Kal

If you want a simple gist of the 'nihayti' (full-on) randomness going on, in this morbid moroseness masquerading as a movie, then just consider one fact, to start with. That Randeep Hooda plays Kartik Aaryan in this film.

By which I mean Aaryan's schoolboy character, presumably in his teens, up until the early 20s, grows up to transform himself into Hooda in his 40s. Don't know what Hooda (such a fine actor) should feel most affronted by — his own off-kilter, sutradhar (narrator's) role.

Or the complete rando of a character his younger version is — can't talk, can't walk, all he does is stalk, the girl in his neighbourhood. The girl's with him, even then. But this bumbling fellow is distracted by a bevy of beauties dying to bed him. Achha?

This is the 'kal' (past-tense) part of Love Aaj Kal, set in the '90s, the love and longing of current times. What about the 'aaj', the present? Appears equally tense. Stars Aaryan as well. Again, can't talk, can't walk, or walk the talk, basically stalks the girl (Sara Ali Khan) he meets at a nightclub, while she is altogether fine with this psycho on the prowl, always in her field of vision. She likes this, in fact. Hmmm.

Fully willing to concede there must be some film, in the filmmaker's head, as is always the case, before they set out to shoot — whether it remains under-realised or not, is another matter. But WTH's this? Who are these loonies on screen? Are there codes designed to reveal their genuine mental condition — Tourette, OCD, anxiety, anything — that's been secretly revealed, that I'm unable to discover yet? And what am I supposed to feel for these floozies? Sad, happy; in the mood for love, what? God only knows.

Here's what we do. The film's directed by Imtiaz Ali (Jab We Met, Rockstar, Tamasha). Never mind his last release, When Harry Met Sejal (2017), about a couple driving around a bunch of restaurants and hotels looking for a missing ring, or some such. Maybe SRK happened to him there (meaning pressures of stardom took its toll).

As a director there's much to pick from Ali's filmography, decidedly because he's devoted himself to emotionally strong, modern rom-coms, a dying genre. And that I love the most, if served well — ideally medium-rare. And even if nothing works, there's usually the promise of a great soundtrack (AR Rahman's the man), shot over stunning locations. These are redeemable crutches. There's none of that going on here either.

What is? Love Aaj Kal is supposed to be the sequel of Ali's lovely Love Aaj Kal (2009). Let alone the fact that the filmmakers couldn't come up with a title for a new film, as you step in post-interval, with a hip-hop number magically crackling on screen, absolutely from nowhere, you realise there's not even a pretence of a picture left anymore.

Some of the side-characters, especially the modern couple's parents (Simone Singh, etc), even the leads in several sequences, seem like they've been airlifted from a horror franchise. As does the eerie background score, on occasion. Kuch bhi chal raha hai (anything goes). You carry on watching, because you have to.

We all have our own ways of dealing with such assaults on senses. I could hear audiences from the back unintentionally sniggering at key emotional moments. All I could do, sitting in the front-row, is fidget on my phone, and note down lines from Sara's character. Just to go with the randomness of it all.

All that you need to know, am guessing, is this was supposed to be some sort of a late-millennial take on balancing career with relationship — the new-age commitment phobia, if you will. Going back to Sara's character, she explains, "Par balance hai hi nahin mujhme." Have lost all mental balance too. Bas, ho gaya boss.

Next Story : Siddhant Chaturvedi: Ranveer Singh and I were like a Bollywood couple