Manushi: I'd want to contribute towards portrayal of Indian woman 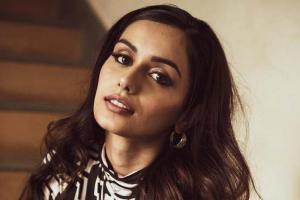 
The incredibly gorgeous Miss World 2017, Manushi Chhillar, is the leading lady of YRF's biggest historical film Prithviraj, based on the life and heroism of the fearless and mighty King Prithviraj Chauhan. The YRF big-budget entertainer features superstar Akshay Kumar in and as Prithviraj, and Manushi plays the role of the gorgeous Sanyogita, the love of the king's life. Manushi has been one of the most sought-after new faces in Bollywood and the 22-year-old ethereal beauty is getting the grandest launch any newcomer has seen in recent times.

Manushi reveals she has always been fascinated about the YRF heroines because she has grown up loving and adoring these films and the leading ladies! "I have grown up on YRF films like Dilwale Dulhania Le Jayenge, Bachna Ae Haseeno, Band Baaja Baarat, Rab Ne Bana Di Jodi, etc and have always been fascinated about how the heroines have been presented and projected in such movies. Such actresses captured the imagination of the audiences and entertained them through their craft," says Manushi.

The 22-year-old beauty says she has been fascinated by the on-screen goddesses and it's amazing that she is one of the YRF heroines now! "Having loved such characters on screen, having chilled and danced on the songs of these beautiful actresses growing up, and having idolized such screen icons, it is quite cool for me that I'm a YRF heroine today. I'm fortunate that I am being groomed and managed by the company for my debut film and career in Bollywood," she says.

Manushi is clear that as an artist she wants to do her bit to ensure that she plays women characters that stand out for their inherent virtues! "It is a huge honour for me and I'm giving my everything and working really hard to try and get a lot of love and appreciation from audiences when my film releases. I'd want to contribute towards portrayal of Indian woman in cinema who are forward-thinking, beautiful, strong, vocal, independent and upright human beings. Sanyogita is a dream role for me and I'm doing my best to do justice to the responsibility that has been entrusted on me," says the breath-taking beauty.

Next Story : How Fatima Sana Shaikh is marking her distinct space in Bollywood