This is the sort of film that ideally aims to ride on its supposedly noble intentions alone, rather than engaging characters or story. 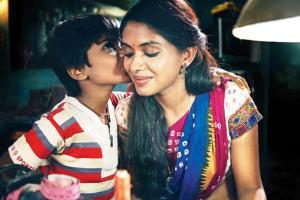 What's the first thing you wonder about this film, given its title, and the fact that no head honcho of a democratic state in world history has ever had as many biopics - shorts, docs, features, web-series - simultaneously being made on him/her, even while they're still in office?

So, well, no, this isn't really a film on Prime Minister Narendra Modi. Or it is, only by suggestion, since a boy writes a letter to the PM, which would be Modi (who else), but we don't see his lookalike on screen (unlike Uri, and many others in the pipeline).

Be that as it may, a film that focuses on the problem of urban, open defecation, the eradication of which should be on the agenda of every corporator/legislator, and of course the PM (current, or ones to follow), belongs to proper public service advertising/announcement (PSA) space, rather than propaganda of any kind.

Why are your suspicions slightly legit still? For it's hard to explain why the filmmakers would go ahead with this PSA script (unless they're genuinely struggling, or been forced into coming up with one), when every element here has been dished out plenty of times before, and there is no attempt to top any of it either.

And you could go right from trying to meet, or connect, with a head of state (I Am Kalam, My Name Is Khan), to detailing life among kids in a Mumbai slum (Salaam Bombay, Slumdog Millionaire), or in general, the Mumbai slum itself (Dharavi, Gully Boy), to addressing head-on how the poor in India (men, but women, in particular) have to bear the burden of shitting in the open, because there are no frickin' loos, which is what the rather entertainingly done, recent Akshay Kumar picture, Toilet: Ek Prem Katha, was all about.

Even as a peek into the lives of Mumbai slum-dwellers, who constitute about half the metropolis, the Iranian Majid Majidi's Beyond The Clouds (2017) seemed a far more perceptive, original and thought-provoking take, than this local, thoroughly distant, predictably upper-class view of the lives of the downtrodden others, with every conceivable cliche that must dictate it - rape, domestic violence, drunken males, and Sheela Ki Jawani, Baby Doll type of Bollywood songs/entertainment as the only route towards momentary escape.

This is the sort of film that ideally aims to ride on its supposedly noble intentions alone, rather than engaging characters or story, the gist of which is that there's a little boy (a wonderfully cast Om Kanojiya), who does odd jobs selling newspapers, condoms, etc.

He shares a lovely bond with his single mother (Anjali Patil). He writes a letter to the PM hoping for a public toilet in his slum. That the right to shit in peace must involve a petition to the PM, no less, is tragic enough. That you don't feel for anyone in this film (let alone, the issue), with the camera hovering around a bunch of parallel songs/story-lines, aimed to extend a simple short film into a full-length feature, is perhaps worse.