Mukesh Chhabra on Sushant: Everyday I think 'Why didn't I meet him?'

In an exclusive interview with mid-day.com, Dil Bechara director Mukesh Chhabra talks about Sushant Singh Rajput, casting him for his debut Kai Po Che, and the one thing he keeps thinking about after his demise! 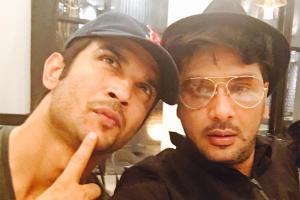 
The demise of Sushant Singh Rajput has left an aching void in all of our hearts that may not fill again. It has been more than a month and actors and all his fans still continue to miss him and rewatch and revisit some of his most memorable performances and films. His last film, Dil Bechara, has turned out to be the most watched film on the OTT platform in a week.

The director of that film, Mukesh Chhabra, also known for his casting in many successful Hindi films, has now spoken to Anjali Singh of mid-day.com about Sushant Singh Rajput and what really bothers the director about him.

For all of those who didn't know, Chhabra was also involved in the casting of Rajput's debut film, Kai Po Che, which came out in 2013. Talking about his first meeting with the actor and his first impression, the filmmaker said, "He had done a lot of television and I had no idea, we hardly get time to watch television since we all are busy in our own lives."

He added, "Shobha Sant made me meet Sushant long time back, but that time I was not casting for Kai Po Che, when Abhishek Kapoor approached me for the film on the lives of three boys, I said 'okay let's do it.' So I met him in Versova and told him I'm casting for a film called Kai Po Che. The film was earlier titled Ahmedabad. He auditioned for the role and he was so charming and his charm worked for the character."

He continued, "I saw some rushes of the film and loved it, he then did PK with us, I saw that the guy is really good, so I called him for PK and that's how our journey started and he then went on to become Sushant Singh Rajput, as we all know." The next question was about the actor's remarkable qualities that Chhabra could think of as a friend and a filmmaker.

He added, "As a person, very positive and always very charming. You couldn't talk to him for just 4-5 minutes, you needed at least 2-3 hours. Great Guy! And as an actor, very intelligent, very sharp, he used to write each and every emotion about each and every scene how he's going to perform. When you shoot a film, you never shoot it linearly, you shoot it non-linearly so you need to make an emotional graph, so he used to be ready with every emotional graph of every emotional scene. Very intelligent actor!"

And what is the one thing that goes on in his mind after his demise? He said, "If there wasn't this lockdown, we would have met over and over again but that didn't happen. I wish I could meet him, everyday I think about this. This really bothers me a lot. He spoke to me on my birthday so I kept thinking that he could have met me on that day at my house, but due to the lockdown, we couldn't meet!"

Next Story : Angad Bedi: Flak Gunjan Saxena: The Kargil Girl is getting is unfair