Individually, both debutants Zaheer Iqbal and Pranutan Bahl sparkle, but they meet only at the fag end of the film. 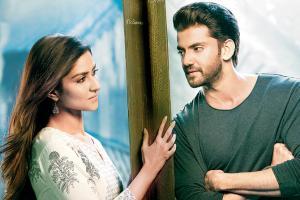 I, for one, am not of the belief that remakes are a bad thing. If made well, they can stand their ground and even shine, in some cases, better than the original. Given that Notebook is directed by Nitin Kakkar (the man behind the luminous gem Filmistaan), I had a fair share of expectations, despite the underwhelming trailer. Kakkar's powerful storytelling in the unassuming Filmistaan played in my mind as I walked in to watch Notebook, an adaptation of the Thai film, The Teacher's Diary that released in 2014.

It's not a good sign when, in a love story, children steal your heart over the lead pair. Individually, both debutants Zaheer Iqbal and Pranutan Bahl sparkle, but they meet only at the fag end of the film. Kakkar draws out adequate performances from both, playing to their strengths, using the naivety of the novices to build on some screen charm. But with so much solo heavy lifting and a wobbly screenplay in tow, Kakkar delivers far short of what he is capable of.

As a plus, the film uses the picturesque settings of Kashmir, blending it with good music. The story, much like the original, traces the unlikely love life of Firdaus (Bahl) and Kabir (Iqbal). She leaves behind a notebook full of sketches and doodles; he is her replacement in a school where they teach. The notebook becomes a source of hope for Kabir, who connects deeply with her over the pages. She is an unusual teacher in an abusive relationship. As Kabir struggles to bond with the children, the notebook comes handy. The rest of the film paves the way to their final interaction.

Kakkar remains faithful to the original design, transporting his viewers into a world of innocence. It is concerning that the director never delves deep into the problems of the state, bringing forth its elements for a pure cosmetic use. A child with a fundamentalist father is a needless addition to the plot. Kabir's former job as a soldier, and his Kashmiri pandit background, also do little to add to the larger plot. It's a balanced view, but not a bold one; too simplistically handled, which is unlike Kakkar's risque style.

Watch it for the adorable kids, and if you are excited about star children in general, Pranutan is a good deal as a first timer.

Next Story : Pahlaj warns Kangana, says he has enough information to cause trouble