Nushrratt Bharuccha, who is all set to play the character of a teacher in Hansal Mehtas Chhalaang, speaks about her new project, her new home, and family at a length. 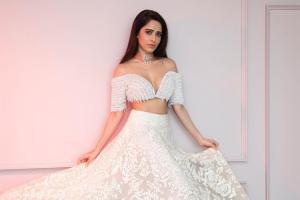 
Nushrratt Bharuccha is all set to play a different character in Hansal Mehta's directorial venture, Chhalaang. This will be the first time Nushrratt will be sharing the screen space with Rajkummar Rao and Mohammed Zeeshan Ayyub together. In an interview with Pune Mirror, Nushrratt spoke about her new project, her new home, and family at a length.

When quizzed about her upcoming project, the actress quipped, "Being a part of this world with Raj and Hansal sir makes me want to change my life for the better. It's great to play a positive character for a change."

The Pyaar Ka Punchnama actress moved into a three-bedroom apartment, which is at a five-minute walk distance from her family home in Juhu. The actress, who is extremely proud of her achievements, brought her new den with her own earnings. "I feel very responsible now. While the place was being painted, I'd tell the painters that if I found even one handprint on my white walls, they'd have to stay the night and clean up. I can be a tough taskmaster."

Nushrratt admits that the house is like her baby. "I did everything myself, from choosing the colour of the walls to the curtains and even the bedsheets. Thanks to the sheer curtains in my bedroom, I'm up at 8 am every day and the world looks sunshine-y. This Diwali will be special as it will be the first in our new home."

The actress has spent the lockdown period being calm, and at home "These last seven months were like a vacation for me even though I was locked up at home. I was mentally relaxed because we didn't know what would happen next." She further added how she has taken up the opportunity to work more, instead of taking an off again and going on a vacation. "But now, it will be just work for the next six-seven months; I want to enjoy that. I am currently in Agra filming Hurdang, there's still around 10 days of work left in Mumbai. Then, I start shooting for Chhori from November 20."

The rumours mills suggest that she has already signed up for a silent film with Durgavati director G Ashok, which will be produced by Luv Ranjan, along with her Dream Girl director Raaj Shaandilyaa. This will be the maiden project for Raaj's production house. "Everything will happen, but to know what and when, you'll have to wait for an official announcement," she said when asked about the further details.