At the cost of sticking his neck out, mid-day critic Mayank Shekhar feels that 'Pink' is even more impactful and powerful than Rajkumar Santoshi’s 'Damini'. He feels 'Pink' does compel one to think. And that’s not all it does 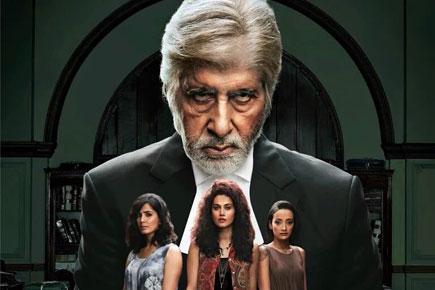 Where exactly do you place a film like this — in the annals of Hindi movies, for instance? For reference sake alone, I’d say, right next to Rajkumar Santoshi’s 'Damini'. Which was such a powerfully moving movie that when a majority of young ones, who were probably not even born or were kids when that film hit theatres in 1993, were protesting on Delhi’s streets against a brutal bus rape in 2011, they called the survivor: 'Damini'.

Does this film leave a similar impact? Frankly, I’d say, at the cost sticking the precious neck out — even more. And why’s that? Quite simply, because the terrible incident described in this film could happen to absolutely anyone of us, or our loved ones.

But, more significantly, the film, up until the closing credits, does not even visually describe the said incident. It grips you still with a gently piercing background score, moments of silence and dialogue, building up the tension, while the audience wonders what really could have happened one unfortunate night when three girls found themselves in a Surajkund resort with three guys. And one of the boys got seriously injured thereafter.

The setting is, of course, Delhi-NCR. Some of the reactions to this picture are probably going to emanate from that fact alone, given how realistic and relevant that makes this film to be — about a part-feudal, part-modern, power-drunk political capital of India that unsurprisingly has also positioned itself as the sexual harassment capital of this nation.

I know, lot of Delhiites balk at the bad rap all the men get for the city they live in, being painted by the same brush. God knows it’s unfair. Yes, I grew up in Delhi. But, the fact remains that I knew not a single female friend, while growing up, who didn’t have at least one horrific sexual abuse story to tell — most of them involving strangers in public places.

Many of those girls would’ve ended up living very similarly to the three lead characters in this film: young, middle-class, working women, sharing a posh, rented apartment in South Delhi (most likely, Safdarjung or Hauz Khas), as against a PG (paying guest) dig up north. Their combined income affords them a fine neighbourhood.

Of the three girls (Taapsee Pannu, Kirti Kulhari, Andrea Tariang: crackers, all), one is originally from Delhi, the other from Lucknow, and the third is from the North East — that odd collective noun that suffices for anyone from seven such disparate states of India (nobody calls a Mallu, a Madrasi anymore; but somehow “North East” is still okay).

These girls are what you call “independent women”. What you mean by that depends on how you view them. Judgment is in the eyes of the neighbour. And this is, of course, not just true for Delhi. It is a national issue.

The men in this film, however, are probably as ‘Delhi’ as you’re likely to find. And here I don’t just mean the way they’ve been cast, which is phenomenal, no doubt. But also just the actors that you see on the screen — from those in bit roles (Vinod Nagpal, Sudhanva Deshpande, Dibang), to the bunch of three privileged boys with serious entitlement issues (Angad Bedi, Vijay Verma, Raashul Tandon), down to Amitabh Bachchan, heading the line-up. Which leads me again to the Damini analogy.

Bachchan, like Sunny Deol from that iconic pic, plays a retired lawyer who returns to fight a case worth fighting for, in a riveting court-room drama, with Bachchan’s relatively under-stated baritone serving as the much needed voice of reason.

So, yeah, you know where this film is coming from. What I’m interested in, or at least we ought to be, is where this film is going — ideally to all those people and places in India, still grappling with a seemingly radical idea that men and women are just, well, you know, equal. It’s shocking, as Pink puts it, the views some of the most unlikely men hold about women — on the basis of how they dress, what they drink, who they love, where they live… Even as we see more and more females in public, party, and work places.

Yes, Pink does compel you to think. And that’s not all it does.