Rangoli Chandel poked fun at the content in Karan Johar's films, suggesting that it was unlikely that Ranaut would wish to feature in them. 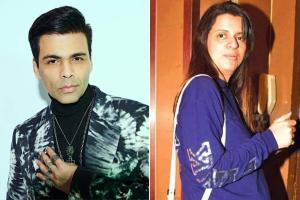 
It appears, Kangana Ranaut's sister Rangoli Chandel is in no mood to douse the fire( s) that the actor finds herself in. A day after Karan Johar said he was "honoured" to earn the Padma Shri along with Ranaut, and that he would " pick up the phone and call her" if he had a film that demanded her expertise, Chandel has attacked the filmmaker in a series of tweets.

Chandel poked fun at the content in Johar's films, suggesting that it was unlikely that Ranaut would wish to feature in them. One of them translated to: " Karan Johar says it in such a manner that he'll call her [ for a film] and she'll come. Kangana needs to like a script. Do you have one that's worth [ pitching] to her?" Chandel also suggested that when Ranaut watched Johar's Ae Dil Hai Mushkil, she mocked the fact that the leading man ( played by Ranbir Kapoor), the " stalker creepy ladka" was urging a girl suffering from cancer to love him.

In a recent interview, Johar had alluded to his 2017 spat with Ranaut — when the actor accused the director of encouraging nepotism in Bollywood — and said that they do not have bitterness between them.

Next Story : Kobe Bryant to be honoured at Oscars 2020