'Reunited,' writes Karisma Kapoor as she clicks a selfie with sister Kareena in London

Earlier, Kareena also reunited with another Kapoor sister - Riddhima Kapoor Sahni. In a picture, shared by Riddhima, it looked like both sisters had a reunion with their aunt Reema Jain 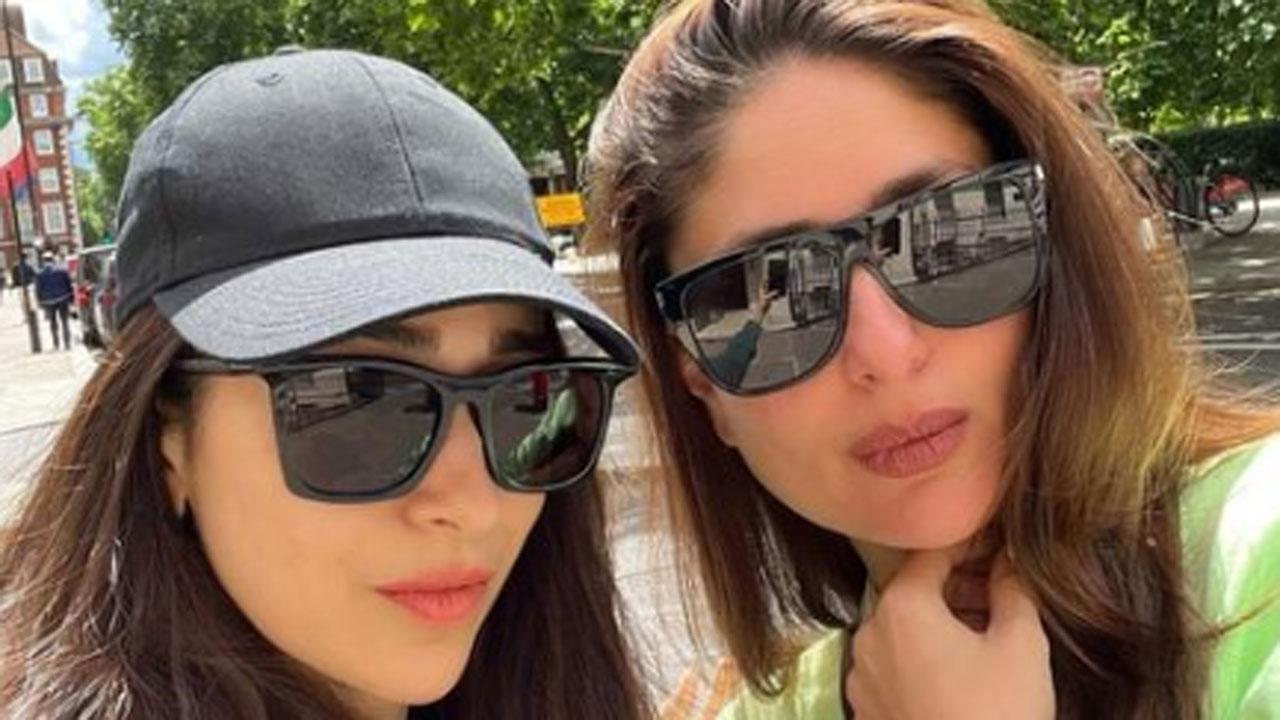 
Big names of Bollywood are currently having a gala time in London and their Instagram is proof! Kareena Kapoor, Gauri Khan, Alia Bhatt, Karan Johar, Manish Malhotra, Shilpa Shetty, Sanjay and Maheep Kapoor, Twinkle Khanna - everyone is soaking up the London sun. Now, the latest to join the London gang is Karisma Kapoor.

Karisma, on Friday, shared a picture on Instagram featuring her younger sister Kareena and it looks like one happy reunion. Sharing the picture Karisma Kapoor wrote, "Reunited #sistersquad." In the picture, Karisma is seen wearing a blue outfit and a cap while Kareena looks fresh in a green outfit. Both sisters sported black sunnies.

Earlier, Kareena also reunited with another Kapoor sister - Riddhima Kapoor Sahni. In a picture, shared by Riddhima, it looked like both sisters had a reunion with their aunt Reema Jain.

Kareena has been in London for quite some time now. Last week, she also attended a 'Rolling Stones' concert with her husband Saif Ali Khan and son Taimur.

On the work front, Kareena will next be seen in 'Laal Singh Chadha' opposite Aamir Khan. The film is slated to release on August 11 and is all set to clash with Akshay Kumar's 'Raksha Bandhan'.

Apart from this, she recently wrapped up shooting her OTT debut project helmed by Sujoy Ghosh. The film is based on the Japanese novel 'The Devotion of Suspect X', which also stars Jaideep Ahlawat and Vijay Varma in the lead roles.

Talking about working with her sister, Kareena said earlier this year, "We have always wanted to work together but till now we haven't got that kind of script. We have not liked anything. Somebody should come with a good script then, we will consider." And there were reports that the sister-duo could be collaborating for Zubeidaa 2.

In 2020, Kareena completed two decades in Bollywood. She began her career with JP Dutta's Refugee in 2000 and became a star as years passed by. She went on to do films like Mujhe Kucch Kehna Hai, Kabhi Khushi Kabhie Gham, Hulchul, Omkara, Jab We Met, Golmaal Returns, 3 idiots, Golmaal 3, Ra. One, Heroine, Singham Returns, and Bajrangi Bhaijaan.

She was also seen in films like Veere Di Wedding, Angrezi Medium, and Good Newwz. She's now gearing up for Laal Singh Chaddha. Karisma, on the other hand, has been a part of successful films like Raja Babu, Saajan Chale Sasural, Judwaa, Hero No. 1, Fiza, Haseena Maan Jaayegi, Dulhan Hum Le Jayenge, Dil To Pagal Hai, Raja Hindustani, Jeet, and was last seen in the show, Mentalhood.