Rishi Kapoor on his homecoming: Learnt to be calm with family, fans

From discovering patience to missing pomfret, Rishi Kapoor opens up on his homecoming after a year in New York 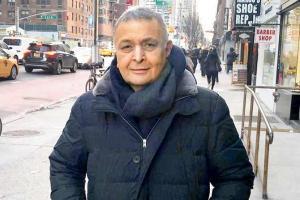 
Tell him his fans miss him, and Rishi Kapoor says he too, is counting the days to his return to Mumbai. The veteran hopes to be with his family when they celebrate Ganesh Chaturthi on September 2. Couple that with his birthday on September 4, and the superstar has enough reasons to be back in town by next weekend. "Celebrating Ganpati is a family tradition. So, I am hoping to be part of it," he says from New York, where he has been seeking treatment since September 2018.

Little can dampen Kapoor's feisty spirit — currently, in the last leg of his treatment, he cheerfully describes his New York stay as "an extended holiday". But the foodie in him good-naturedly complains, "I miss eating pomfret; it's not available here. I also miss the soft homemade chapatis. You get all sorts of naan and rotis, but those soft chapatis made of chakki ka atta are something else!"

As he has been up and around in the Big Apple, he is often thronged by fans not only from India but also Pakistan and Bangladesh. "Taxi drivers don't take money, they only want a selfie with me," he laughs, before narrating a funny incident. "Once I was at a restaurant, which had several Bangladeshi waiters. Each of them came and greeted me. One of the American staff members thought I was an ex waiter there, which is why the staff was talking to me. They were so embarrassed, but I laughed all the way back home."

The past 12 months have been as testing on him as they have been meditative. As he battled the Big C, Kapoor acknowledges that the phase taught him the virtue of patience. "I have learnt to remain calm with my family and fans. I owe it to them; they have given me so much love and sent good wishes. Neetu has been my rock and has shouldered all the responsibilities. So has been my family, who would drop in to give me the strength to battle my illness."

After he returns to the bay, Kapoor promises that he will dive into work once again. "I have to complete The Body [with Emraan Hashmi]. They have been gracious enough to wait for me. There are two more films in the pipeline."

Next Story : Taapsee Pannu: Ready to give woman's perspective a chance