Section 375 Review: Crackling film that delves into the subject wisely

From Akshaye Khanna and Richa Chadha as clashing lawyers to the judges Kishore Kadam and Krutika Desai, everyone is in top form. 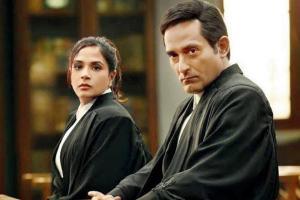 Akshaye Khanna and Richa Chadha in a still from Section 375

I see the irony in the fact that the week mainstream superstar Aamir Khan reversed his decision of not working with #MeToo accused Subhash Kapoor, we have a film called Section 375 release. It’s a good time to re-examine our understanding of what constitutes as rape, sexual abuse and our understanding of the much-discussed movement from last year which is fast losing relevance in an industry that suffers from partial amnesia (clearly).

The law clearly states - a man is said to commit “rape” who has sexual intercourse with a woman against her will; without her consent; with her consent, when her consent has been obtained by putting her or any person in whom she is interested in fear of death or of hurt.

It’s a complex law and in many instances have been debated over for being an extremely harsh one for men. And thus, the resounding victory of this film is the balance with which director Ajay Bahl approaches the story. Without his sharp sense of moralities, this could have easily been reduced to a screeching courtroom drama where thundering “mi-lord-ing” is all that works. Thankfully, for us, this is not that film.

In the first 15 minutes itself, the film will have you squirming in your seats. An aggressive rape scene and a brutal line of questioning of the victim later, the film sets its milieu perfectly.

This is by no means an easy watch. Well known filmmaker Rohan Khurana (Rahul Bhat) is accused of rape by Anjali Dangle (Meera Chopra). The Sessions Court finds him guilty, sentencing him to 10 years’ jail time. Anjali’s modest life is what we start the film with. Humble home, simple parents and working in the dazzling film industry - the stark lives is her everyday reality. She is a junior costume designer who is sexually abused by a man in the position. Ajay and writer Manish make us invest in Anjali and her pain. Even when she dares to file a police complaint against a powerful man who violated her, she has to subject herself to prying questioning of a male medical examiner - What was the position? Did he ejaculate? Did you resist? Have you been sexually active?

Bahl highlights with great precision the mind-space of a rape survivor. When the matter moves to the High Court, the film transitions into a nail-biting Courtroom drama. A pragmatic Senior advocate Tarun Saluja (Akshaye Khanna) takes up the accused’s case. He makes it clear that his impetus is the money which will facilitate his pro-bono work. Because the law itself is so rigid in case of rape, Saluja focusses on creating reasonable doubt.

Facing his passionate protege - Hiral Gandhi - on the field, batting for Anjali, we are taken through their ideological differences. In their respective opening speeches itself, Hiral and Tarun put forth how differently they view the case - “We are not in the business of justice, we are in the business of law. Justice in an ideal; law is a tool,” he says. She talks about rape statistics and how easily men are let off the hook.

A big part of why the film works is its top casting. From Akshaye and Richa as clashing lawyers to the judges Kishore Kadam and Krutika Desai, everyone is in top form. Akshaye and Richa specifically have the burden of carrying the film on their shoulders. His cockiness and her naïveté plays off beautifully on screen as the two fight out the different facets of the case. Akshaye's brooding personality is evened out by Richa's vigour. There's no shrill histrionics at play here, which is one of the film's most winsome qualities. Rahul Bhat and Meera Chopra do their acts to the T.

The real ambiguity of the case is its beauty and Bahl and Gupta, build it with finesse. We are left with plausible versions of the incidents and you view it completely from the perspective of your own life experiences and worldview. We are left with many important questions to ponder about - was it rape? Is rape a mere physical act that happens on one given day or there’s more to it? Does emotional manipulation leading to sex constitutes as rape? Section 375 is a crackling film that delves into the subject wisely, talking of issues that we are only happy to brush under our carpets and bury in our closets. It’s by far one of 2019’s best film and I recommend you give this one a dekko for sure.

Next Story : Dulquer Salmaan gets annoyed by Sonam Kapoor