Shraddha Kapoor, who wooed the audience with her performance in the first instalment of Baaghi, is set to reunite with Tiger Shroff once again. 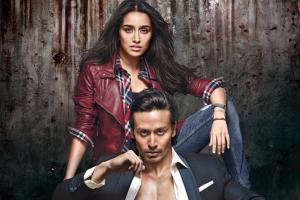 
Tiger Shroff is all set to reunite with Shraddha Kapoor for the third instalment of Baaghi. Its first two instalments proved to be blockbusters at the box office. Where Baaghi had Shraddha Kapoor as Sia paired opposite Tiger, Baaghi 2 had Disha Patani play his love interest in the film.

Producer Sajid Nadiadwala welcomed Shraddha Kapoor on the sets of Baaghi 3 by penning a heartfelt note. Shraddha shared the note on her Instagram handle which read, "Dear Shraddha, you made all of us go Cham Cham! Welcome back to the third phase of Baaghi franchise. We can't wait to see you back in action! Wishing you all the luck and love on kickstarting the journey today. Love Sajid Nadiadwala."

On the work front, Shraddha was last seen in Nitesh Tiwari's Chhichhore opposite Sushant Singh Rajput. Released on September 6, the film has raked in moolah in the double digits thanks to good word of mouth reviews.

On the other hand, Tiger is gearing up for the release of War opposite Hrithik Roshan and Vaani Kapoor. The film is a high-octane action entertainer that is said to be the biggest action spectacle of all times. Helmed by Siddharth Anand, War is produced by Yash Raj Films and will release in Hindi, Tamil, and Telugu on the national holiday of Gandhi Jayanti, October 2, 2019.