Shweta Tiwari's daughter Palak opens up on her Bollywood debut

Palak Tiwari, daughter of TV star Shweta Tiwari, is all set for a Bollywood debut in a horror-thriller film franchise based on true events in Gurugram. 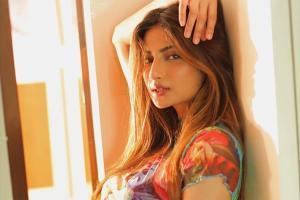 
Palak Tiwari, daughter of TV star Shweta Tiwari, is all set for a Bollywood debut in a horror-thriller film franchise based on true events in Gurugram. The debutante says she feels like she has been ready to take this step for a while now.

"For ‘Rosie', I'll say the movie picked me. After I heard the synopsis of the story it was hard for me not to want to be a part of it. Our director sir's vision for ‘Rosie' is crafted with poise and mystique. It's a vision I'm fortunate to be portraying," Palak told IANS.

Palak is nervous about her debut in Hindi cinema. "Your debut is your first impression, it's an everlasting association but I've also felt like I've been ready to take this step for a while. I have dreamed of this day my whole life and now that it's finally here, there's nervousness and there's pressure to make everyone that has believed in me proud, and give others a reason to believe in me," she said.

Having a renowned television actress like Shweta at home, does Palak take any acting tips from her mother?

"One thing that I truly appreciate about mom is how she approaches helping me with acting," replied Palak, adding that she is shy to perform in front of her mother.

"Whenever and if ever a scene is a little perplexing, or if I'm just feeling stuck, our way to do it is I record myself performing the scene, the best way I know how to, because I get so nervous performing in front of mom. She will then watch the video -- only after I've left the room, because again she makes me very, very nervous and shy for some reason -- and once she's done she'll call me back and tell me everything I can improve on," said Palak.

Palak says her mother Shweta will never do a scene for her and then ask her to emulate that.

The first part, "Saffron Chapter" is based in the Saffron BPO, considered as one of the most haunted places in Gurugram.

The story revolves around a girl called Rosie who was an employee in the office.

Next Story : Sushant Singh Rajput's sister Shweta Singh Kirti: He was planning ahead