sushant Singh Rajputs sister Shweta Singh Kirti shared a post which sheds light on the late actors plans, and they are motivational. 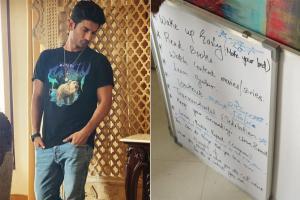 
Sushant Singh Rajput's death case is taking a different turn as the days pass. After ED's probe, now SSR's sister Shweta Singh Kirti has posted a new picture, leaving his fans startled. A new post by Shweta Singh Kirti, sister of Sushant Singh Rajput, once again puts a question mark on whether the actor actually committed suicide as his post-mortem has suggested, or was any other foul means involved.

Shweta's post on Friday evening shows Sushant was actually planning ahead in life and his daily regime until June 29 is proof. In the post, SSR's sister shared a picture of a whiteboard, which had Sushant's handwriting and his a daily to-do list. Take a look!

Bhai’s White Board where he was planning to start his workout and transcendental meditation from 29th June daily. So he was planning ahead. #justiceforsushantsinghrajput

The list includes his plans to practice transcendental meditation daily from June 29. Other instructions include "make your bed" after waking up, "read books, watch content movies/series, learn guitar and workout" among other things.

Commenting on her post, netizens extended their support to her and prayed for justice to be delivered to the departed soul. "Shweta ji, Sushant has taught us so much. He is unforgettable energy. I tell his stories to my kids. He had morals and such infectious positive energy. He is within us. thank you for bringing him to us," shared a user.

"Sushant never committed suicide or forced to do, He isn't the kind of men who can take such a mad step, He is a genius, wise, talented, ambitious and real hero. He was murdered, they killed him. It's a real clear murder, God will help us to get him the justice he deserves, I have a strong faith and let's continue praying," commented another user.

"He is such a project manager. writing down everything! such an inspiration. i wish he had taken that Stanford scholarship and just came here!" shared a fan from California.

Sushant Singh Rajput was found dead on June 14 in his sixth-floor apartment in Bandra (West). SSR's colleagues and friends from the film and television industry expressed their shock and sorrow over his death on social media. The actor's last film, Dil Bechara, which was put on hold for some reasons, released on Disney+ Hotstar on July 24, 2020. The film is the Bollywood adaptation of John Green's book The Fault In Our Stars. Directed by Mukesh Chabra, Dil Bechara is one of the most eagerly awaited releases of this year.

Also Read: Rhea Chakraborty to SC: Was in 'live-in relationship' with Sushant, being 'falsely implicated' now