Ranveer Singh is very excited to shoot the biggest song of his life, Aala Re Aala, Simmba Aala from Rohit Shetty's film, Simmba 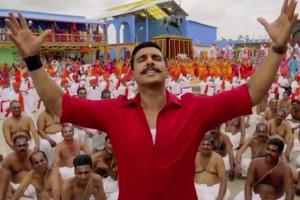 
Ranveer Singh is on a career high after delivering some blockbuster films like Goliyon Ki Raasleela-Ramleela, Bajirao Mastani and this year's Padmaavat. Ranveer Singh posted a video on social media which shared glimpses of the song's shoot from Simmba. The actor is currently stationed at Hyderabad's Ramoji Film City, shooting for Rohit Shetty's extravaganza, Simmba with Sara Ali Khan in the female lead.

Ranveer shared the video of the title track 'Aala Re Aala, Simmba Aala' being shot and affirmed that this is the biggest song ever. "SABSE BADA GAANA (sic)." In the video, we see hundreds of background dancers and junior artists in traditional Maharashtrian attire. In the video, Ranveer says, "Look, what is happening here. My life's biggest song is being shot here. With so many people and massive set-up, anyone would get bowled by just looking at it."

Ranveer Singh is extremely excited to collaborate with Rohit Shetty and has been sharing pictures from the sets on social media. Rohit joins in the video and quips, "Bahut kharcha kar raha hoon tere pe (sic)." (I am splurging a lot on you).

Both, director and actor consider choreographer Ganesh Acharya to be the best part about this song, 'Aala Re Aala, Simmba Aala.'
Simmba is a remake of the Telugu film, Temper, and will see Ranveer Singh play a rowdy police inspector, and is all set to release on December 28, 2018.

Next Story : Dia Mirza: Being friends forever vital for couples