Rajkummar Rao, in absolute top form, plays this part to near perfection, adding yet another facet to his filmography that is probably as, if not more eclectic than any of his contemporaries. 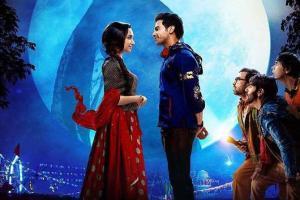 For some, horror is comedy anyway; although audiences stepping into the theatre, seeking the former, and returning with having received the latter, are usually not the same. Stree is a horror-comedy. But more literally so; in the sense that the scenes nearly alternate between the two genres.
At one end this is a movie about a bunch of hilariously 'theth', rustic dudes in a desi small town, going about their happy-go-lucky ways over stuff that relates to the young, regardless of where they're from—love, sex, dhokha, etc.

On the other hand, you curiously follow what happens to folks in a mythical hamlet as a bad spirit makes her annual visit, preying on young boys, in particular. There is a spoiler of sorts (if you may) embedded quite early on in the script, given that there is a young female visitor (Shraddha Kapoor) in this town, falling for the hero—a super-talented ladies' tailor ("Bhagwan ka darji-roop avatar"), who can literally size up a woman, merely looking at her various physical dimensions.


Rajkummar Rao, in absolute top form, plays this part to near perfection, adding yet another facet to his filmography that is probably as, if not more eclectic than any of his contemporaries'. To be fair, Rao made his debut in a lead role with a (relatively run-of-the-mill) horror film, Ragini MMS (2010).
This is of course vastly different as a genre-bender. Which is quite simply the uniqueness that draws you towards the film first. Not that we haven't seen Hindi horror-comedies before, even if 'horrex'—mixing horror with sex—has been the more traditional formula to get bums on grind-house seats.
Bhoot Bangla (1965)—with the iconic, Mehmood-RD Burman song/scene, 'Main bhookha hoon'—could well have been the first Hindi horror-com. You only have to sit through Naanu Ki Jaanu (with Abhay Deol), from earlier this year, to get a sense of how this horror, comedy combo can be such a slippery slope.

The filmmakers here, supremely strong on craft, pull it off swiftly though, landing most of the punches (including punch-lines) at the right place. Directors Raj Nidimoru and Krishna DK, popularly known/credited as Raj&DK have written this script. If you've followed their films—which includes the Saif Ali Khan zombie comedy Go Goa Gone (2013)—you'll know them as slickly urbane directors, with very obvious American-indie sensibilities.

This has a heavily Hindi-heartland setting. The movie weaves in even romance, song, and dance into the horror-com plot. Which probably explains why they may have brought in the talented, first-time director Amar Kaushik (best known for the award-winning short, Aaba), dialogue writer Sumit Aroraa, to take the script forward. Both add much magic to the material. As does the incredible ensemble cast—Pankaj Tripathi (Rao's Newton co-star), in particular.

That's for the set-up. What about the pay-off? I'm not sure if it's half as good. But hey, I'm only talking about the end. Up until then, you laugh at the humour, and get sufficiently spooked out, when it's supposed to be horror. As against the other way round. That's already saying a lot for an unpretentious genre that usually promises such little, anyway.

Also Read: Rajkummar Rao Tries A Hand At Horror, With A Twist Of Comedy

Next Story : Abhishek Bachchan: Want to be challenged at this point