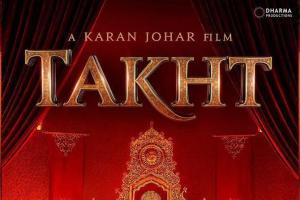 
Ever since Karan Johar has announced his magnum opus, Takht, there has been tremendous excitement amongst fans and critics to see how will he conceive and project a period drama, a trajectory so far reserved for filmmakers like Sanjay Leela Bhansali and Ashutosh Gowariker. And given Johar's penchant for working with big stars, he assembles the largest cast in his career for this period drama.

But in case you've forgotten, Sajid Nadiadwala is also planning to release Salman Khan and Jacqueline Fernandez's Kick 2 during the Christmas weekend. If the clash happens, it could be massive, to say the least. Coming back to this period drama, Kaushal will essay the role of Aurangzeb, Singh will play Dara Shukoh, Pednekar will play Nadira Banu Begum, Bhatt is essaying Dilras Banu Begum, Khan is donning the character of Jahanara Begum, and Anil and Janhvi will play Shah Jahan and Zainabadi Mahal respectively.

Talking about the film, Anil Kapoor even said in one of his interviews that he has never done a film on such an epic scale before. Well, going by the fact that the team will have a 170-day schedule, Johar is surely making sure India witnesses the biggest period drama of the Millennium!