Tanhaji: The Unsung Warrior in that sense, wholly lacks intimate passions, hardcore drama, and individual machinations to lift it beyond the level of basic history 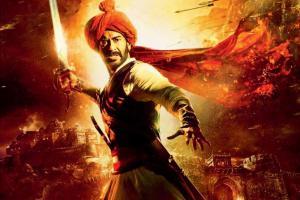 Warriors, by definition, remain unsung. It is kings who make it to history. This film is about King Shivaji's lieutenant, Tanaji, a subedaar, who mounted a fortress (Kondhana) on his ruler's behalf. He took on Aurangzeb's fort-keeper in the gateway to the South — Udaybhan Rathore — along with the massive Mughal army posted atop.

A society/culture is essentially the stories it tells itself. And while I hadn't heard of Tanaji, I'm told the warrior is quite a loved legend across Maharashtra. He's at best, a single-para footnote in school-history text.

That a film on him is made for a nationwide audience, while we still don't have a seriously in-depth, big-budget, dramatic biopic on Chhatrapati Shivaji Maharaj himself, is a lot like reaching out to folk, who are hardly acquainted with the Ramayan, and telling them the story of Lakshman instead.

Unsurprisingly, Shivaji Maharaj's character (Sharad Kelkar; so inspiringly cast), who commands such mystical reverence anyway, stands out foremost in this film. Think he appears for hardly a minute or few.

Even the antagonist Udaybhan bears greater depth than the hero, with his story segueing slightly into his private life, mostly as passing reference though. Saif Ali Khan plays this villain. By now, whatever role he's in, you can safely assume he'll attempt something new. That way, never a disappointment. Whether the role works or not, of course, entirely depends on the material at play.

Or the script, if you may. What're we really looking at here, from that perspective? Tanaji, who delays his son's wedding to attend call of duty. Genuinely that's the conflict from a personal point of view. I'm not sure it's engaging enough.

But this is a historical drama, or thriller, if you like. What matters equally in such a period piece, I suppose, is its place in history. Ashutosh Gowariker's recent, relatively under-rated Panipat (2019), I thought, was a history-buff's delight — delving into such a popular battle, known to have maximum casualties over a single day in the history of war. There was much political intrigue, maneuvering, and egos to merit a feature. Sanjay Leela Bhansali's Bajirao Mastani (2015), Padmaavat (2018) were so much about 'dard' besides the 'daring'!

The story of Tanhaji, in that sense, wholly lacks intimate passions, hardcore drama, and individual machinations to lift it beyond the level of basic history. That said, not going to dismiss this film outright. Certainly not. Simply can't. There's a lot going for it too.

Ajay Devgn, playing the title role, who's also produced this film, deserves most credit for the VFX company he owns that's done the CGI (computer-generated images) for this film — available on both 3D and 2D. I watched the 3D version.

Pretty sure Tanhaji is the most accomplished Indian 3D film I've seen — in terms of depth of field, for one. Which I guess is anyway the best measure for a good viewing on 3D — means so much more than stuff flying into your eyes while you wear black glasses inside an unlit hall. The screen isn't dim here; that's a relief again. The quality of the image, as you look furthest away from the closest object, is absolutely first-rate. As is the recreation of guerilla-war sequences, fortresses, army, and the era in general — pretty much all which on a dark-grey palette seem VFX/CGI work.

Especially the climax sequence that holds your attention through and through. Wish you could say that for the film itself, that you'd have to wade through, in order to reach the end. Gets quite pakau after a point, boss. You just want everyone to somehow get to the fort and get it over with.

Next Story : Ranveer Singh reveals the much awaited logo of his next '83