Team Sonchiriya promotes the film in a unique way

Sonchiriya is all set to release in next month, cast and crew is on a promotional spree and seen promoting the film on social media as well 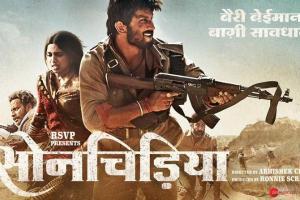 
Earlier, to build the excitement team Sonchiriya opted for a unique promotional strategy where Sushant Singh Rajput, Bhumi Pednekar, Ranvir Shorey has seen sharing videos on their respective social media handle where all three actors appeal audiences to visit Chambal taking a risk on their own.

Now the team Sonchiriya has posted an interesting video where all the three actors have seen endorsing Chambal tourism and dare you to visit Chambal asking "Aake Toh Dikhao!".

RSVP posted a video featuring Sushant Singh Rajput, Bhumi Pednekar and Ranvir Shorey where all three actors are seen bossing around Chambal and in the end the cast appeals all the audience to watch Sonchiriya which is releasing soon in the nearest theatre.

All the promotional videos of Sonchiriya which are out already and have created a lot of anticipation for the film which will definitely pull the audience to the theatre. The story of Sonchiriya is set in the 1970s showcasing a small town ruled and dominated by dacoits. Multiple gangs fight over the struggle to attain power. The cast dons fierce avatars in sync with the theme of the film.

Sonchiriya promises to be a power packed action film giving a glimpse of the glorious years if dacoits in central India. Shot in the valleys of Madhya Pradesh, Sonchiriya presents an ensemble cast with an intriguing storyline.

Directed by Abhishek Chaubey who has earlier presented 'Udta Punjab' and 'Ishiqiya', 'Sonchiriya' presents a rooted tale set in Chambal. Produced by Ronnie Screwvala's RSVP, The movie is slated to release on 1st March 2019.

Next Story : Nawazuddin Siddiqui and Sanya Malhotra's Photograph gets a release date