Early this year, it was announced that Vidya Balan will play Indira Gandhi in an adaptation of journalist Sagarika Ghose's book Indira: India's Most Powerful Prime Minister 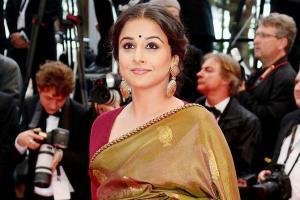 
After Tumhari Sulu (2017), Vidya Balan has disappeared from the big screen. Early this year, it was announced that she will play Indira Gandhi in an adaptation of journalist Sagarika Ghose's book Indira: India's Most Powerful Prime Minister.

There has been speculation whether it will be a film or a web series, but there has been no news about it. The talented actor has been travelling and shooting for a couple of brand endorsements for the past six months. Those in the know say that Vids, 39, just does not want to do any another film. She only wants to be part of meaningful cinema. But being out of sight means being out of mind for filmmakers.

Meanwhile, in light of the increasing cases of child sexual abuse, Vidya Balan has taken it upon herself to take forward the cause she addressed with Kahaani 2 (2016) where she played a survivor of sexual assault. The actor has come on board as the goodwill ambassador of Arpan, a Mumbai-based non-profit organisation that works in tandem with schools and communities to increase awareness on the subject.

Balan will work with the organisation to expand the reach of the project to other schools across Maharashtra. A source says, "Vidya will also help them formulate new initiatives that can be added to the current programme. Once the complete programme has been designed, they are considering reaching out to the Ministry of Women and Child Development, requesting them to make it mandatory in schools."

Also Read: Sanjay Dutt off to a holiday with Maanayata, kids and friend Paresh Ghelani

Next Story : It's 'first work, then holiday' for Ajay Devgn