The eternal beauty of Bollywood and an ardent advocate of climate conservation, actor Dia Mirza has turned 41 today. The former Miss Asia Pacific, who began her acting career with ‘Rehna Hai Tere Dil Mein’ in 2001 and has been a part of the film industry for over two decades, still remains to be one of the biggest heartthrobs of the country. Blessed with innate beauty and grace, Dia’s low-key attitude is something which makes her more likable. The actor who is always beaming with joy and positivity, Dia is adored by her fans for having a unique persona which is seen equally on both, on and off-screen. While other female stars of Bollywood flaunt their high-end ensembles on social media platforms with all pomp and show, Dia on the other hand, opts for simple outfits and still manages to turn heads with her effortless style. The ‘Kaafir’ actor who nails her fashion game every time she steps out in exquisite outfits, Dia rarely misses a chance to grab eye-balls with her praise-worthy red carpet looks. As the queen of simplicity is celebrating her 41st birthday today, SNEHA SINGH NISHAD takes a look at some of her best fashion moments that proves that Dia is a personified diva!

Stunner In Saree: Draped in pastel pink saree, Dia exudes nothing but grace as she poses in Anita Dongre’s ethnic ensemble. Her majestic saree had a broad golden border along with thread details of golden resham. To add on the glam quotient, Dia paired a matching sleeveless blouse with knots at the back. For accessories, Dia opted for a statement choker studded with white stones. For earrings, Dia wore statement diamond earrings. To keep things simple, Dia opted for a nude make up and tied her hair up in a messy bun.

Gleaming In Green: The flag bearer of sustainable and green fashion, Dia is one such female actor who puts comfort before style. The ‘Thappad’ actor who keeps social media hooked with her elegant ethnic choices, knows how to pull-off uber-cool outfits and look comfy, as well as chic at the same time. Recently, the actor was seen donning a green co-ord set which included a sleeveless jacket, a trouser and a knot belt. The jade green ensemble which had hand printed floral prints with vines all over, gave a tropical vibes to her overall modern outfit. The actor wore a black tank top underneath the jacket and for the accessories; she wore a multi-layered gold necklace. Dia rounded off her urban yet elegant look with black heels. With minimalist make up, Dia’s beauty gleamed in her green outfit.

White Delight: Dia’s social media feed is a testimony of her unmatched beauty and simplicity. She takes the internet by storm whenever she drops a photo of herself cladded in ethnic attires. The actor who’s love for traditional Indian outfits is no longer a secret, bowled over the netizens when she shared a series of photos dressed in a spotless white angarkha anarkali set. Her white salwar kameez, which consisted of a full-sleeves angarkha anarkali kurta with a deep neckline, loosely fit trouser salwar and a dupatta with floral embroidery near the border area. The silver border on her dupatta and the floral embroidery in pink and silver added zest in her spotless outfit. To accessorize her look, Dia wore aesthetically designed round shaped earrings. With a flower in her hand Dia looked no less than an angel. To round off her ethnic look, Dia wore white juttis with floral prints. 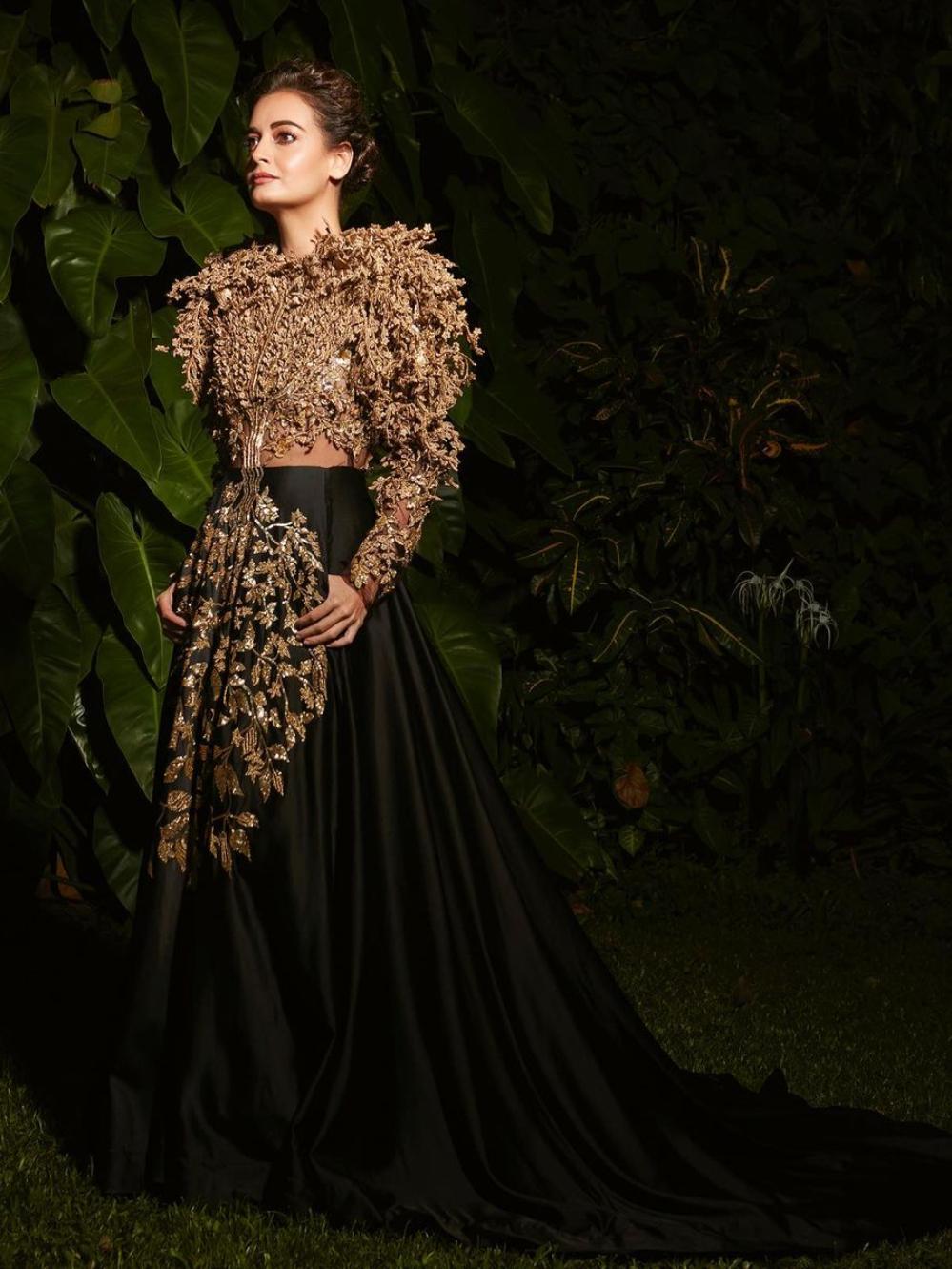 Tree of Life: Celebrities in the west have been using fashion as a means of communication and it is looked upon as one of the strongest forms of self-expression in Hollywood. Actor and a proud environment warrior, Dia stole thunder when she made a striking appearance at the Filmfare Awards 2022. Dressed in Rahul Mishra’s creation, Dia oozed glamour with her black and gold embellished gown, the ‘RHTDM’ star called her regal ensemble, ‘The Tree of Life’. The ensemble which had delicate leaf-like embellishments running all over from top to bottom, gave a dramatic edge and a meaning to her outfit. Her golden top with power sleeves along with the design on her waistline amped up the glam quotient of the attire. The golden embellishment and the majestic flare at the bottom made the ensemble stand out. With hair tied in a neat bun, shimmery eye make-up, glossy lip colour and no accessory look, the queen of simplicity slayed in her glamorous avatar.