'Sicario' is a darkly enveloping, edgy, tension ridden thriller that may seem familiar but has more depth and dimension than the average Hollywood cop-based thriller. The characters are beautifully fleshed out. Emily Blunt gets her teeth into the role and gives it her all 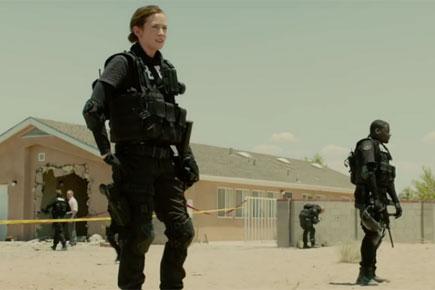 The film opens with the tag that 'Sicario' was originally used to describe Hebrew violent offenders who became an extended arm of the Zealots against the Roman occupiers. But in modern day slang, representing Mexican drug mafia, the word simply means 'hit man'. In essence that's what we get to see here.

Watch the trailer of 'Sicario'

The extended arms of the law, a team formed by an elected government task force of an idealistic FBI agent Kate Mercer (Emily Blunt), Matt (Josh Brolin) from special-ops, a roughish task force leader and Alejandro (Benicio Del Toro), a mysterious consultant, are set to raise the ante on the war on drugs at the border areas between USA and Mexico. While Matt and Alejandro appear to be on the same page, Kate feels like a fish out of water. More so because she is being kept in the dark about the true intentions of the assembled force.

As the narrative progresses, the revelations come out in a jerky rough and tumble. It’s not a pretty sight. Kate is a woman in a largely man-dominated world and feels the pressure of their testosterone. Effectiveness of the operation is the key here. First on the agenda is to pick an important hostage from the Mexican border town of Juarez to El Paso with the co-operation of the Mexican police which in turn leads them to a cop on the inside and eventually a drug kingpin who can lead them to the Big Boss.

Kate finds herself confronted with violations that go against all law and ethics, in a space where their life is in constant danger. She is roughed up and her objections against unethical, against-the-ordained code of conduct, is shot down with unpalatable force. She begins to realise that she has been given the job for reasons other than her professional skill. She is a patsy so-to-speak (but not in a demeaning sexist way). The tour is pretty hellish. And she has to grapple with her own conscience as well as the moral ambiguities in the methods employed and weigh it against the social impact of what this task force is set to achieve. Fighting bad with bad may not be the ideal way but in a war where the odds are heavily in favour of the drug lords, is it the only way?

Dennis Velleneuve raises this and many other questions on his pathway to establish a darkly enveloping, edgy, tension ridden thriller that may seem familiar but has more depth and dimension than the average Hollywood cop-based thriller. No doubt that this is a frequently mined area of operation for most Hollywood flicks. But Villeneuve doesn’t take the by-the-numbers route to achieve his distinction. The characters are beautifully fleshed out. Kate is the ideal counterpoint to her corrupt nihilistic partners. Emily Blunt gets her teeth into the role and gives it her all. Del Toro and Brolin lend effective support. The intensity of engagement, the desolation in the atmosphere and the dark danger emblemized by the harsh objectivity of the camera lend this film a rarefied existence that is eminently praise worthy!

Next Story : Ozzy Osbourne spies on neighbours with drones