Alita: Battle Angel may have taken a long while (twenty years) coming to screen, but the end result is fantastic enough to keep you asking for more. 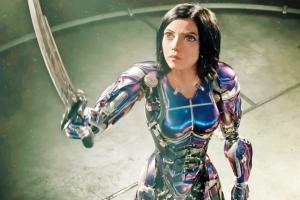 This film, which has Robert Rodriguez and James Cameron working together with Peter Jackson's visual effects, has wonders never experienced before in cinema. The film may have taken a long while (twenty years) coming to screen, but the end result is fantastic enough to keep you asking for more. A manga-based action thriller, James Cameron's $200 million-worth, long cherished dream is aimed at young adults seeking fresher pastures from that of The Hunger Games variety and hopes to make it to bigger box-office returns than that sub-genre hit-starter.

Cameron started on the cinematic adaptation of Yukito Kishiro's original manga comics way back in the late 1990s, (much before Avatar), but the phenomenal success of Avatar had him relinquishing directorial control to Rodriguez while holding firm as screenwriter (with Jon Landau and Laeta Kalogridis) and producer.

The resultant kick-ass cyberpunk adventure may not be as original as he imagined it, but it has certainly got all the chops to make it to a long-term fan-following on its own.

The filmed adventure is set 500 years from now, in Iron city - a junkyard that is a wasteland for the flying citadel of Zalem. The city is peopled with AI controlled cyborgs mingling with real humans in a community so tech-spangled that it's hard to decipher one from the other. Kindly Doctor Dyson Ido (Christoph Waltz) reconfigures a former robot superweapon and rechristens her Alita (Rosa Salazar), after his own daughter. I do, who moonlights as a hunter-warrior, tries to protect the young Alita, but her mind has memories of a past that keeps haunting her present. She even develops a crush on handsome robo-junk dealer Hugo (Keean Johnson) and eventually ends up becoming the super weapon she once was.

The plotting here is a little too jumbled up, ensnared as it is in creating set-piece thrills and out-of-this-world experiences. Stereotype characters and genre tropes make the engagement less than wondrous. The tech-specs are certainly the best we've seen in a long time, the IMAX imagery is splendid and beguiling and the vivid expressions of the actors make it feel all the more real and intimately experiential.

Even though Salazar is the most riveting and fascinating of characters, she does feel a little artificial at times. The CGI blends in effortlessly with digitally morphed motion-capture performance, but the artifice can be felt - too strongly at times. The array of side characters also feels like old hat killing the originality of the experience and allowing déjà-vu to creep in. Even so, there's no belittling this explosive cutting-edge adventure that takes cinema thrills to never-seen-before heights!

Next Story : Nick Jonas to return for 'Jumanji' sequel