This is what Brian Kirk has to say on his film, 21 Bridges

Brain Kirk spills the beans on his upcoming film, 21 Bridges and what the audiences can expect from it 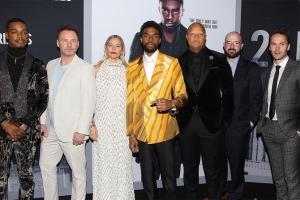 
21 Bridges, which is produced by The Russo Brothers, is all set to release in India on November 22, 2019. The movie stars Chadwick Boseman in the lead.

"We wanted to bring significant moral and emotional substance to the film," Brian Kirk adds, the director of the film. "It's more layered than a simple good versus evil story. Andre ultimately wants to save his prey, Michael, played by Stephan James, and their respective journeys are toward connection and interdependence. That was a fascinating and incredibly strong core element to explore."

Malcolm Gray co-producer of the film says "We wanted the cops and bad guys to be equally compelling, to the point where you may actually be rooting for the two gunmen to escape, as much as you are for Andre to capture them. All the characters are flawed and human, and because of their circumstances, they are forced to examine their own morality."

Next Story : Dwayne Johnson reveals how Jumanji sequel had gotten bigger and better