Following the global success of Jumanji: Welcome to the Jungle, the film reunites the avatar team of Dwayne Johnson, Jack Black, Kevin Hart, and Nick Jonas 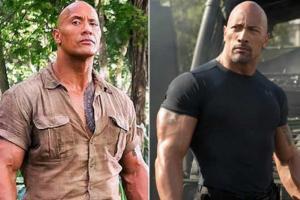 
This holiday season get set to experience a thrilling ride as Jumanji: The Next Level hits the big screen on December 13, 2019. Following the global success of Jumanji: Welcome to the Jungle, the film reunites the avatar team of Dwayne Johnson as Dr. Smolder Bravestone, Jack Black as Dr. Shelly Oberon, Kevin Hart as Mouse Finbar, Karen Gillan as Ruby Roundhouse, and Nick Jonas as Seaplane, plus new players Danny Glover as Milo, Danny DeVito as Grandpa Eddie, and Awkwafina as a new avatar, Ming.

According to superstar Dwayne Johnson, the sequel is going to be bigger and more epic!

"The scope and the scale of the film is really epic; when it's Jumanji, it commands that. We went into this knowing that the pressure was on, and we've got to raise the bar. We've got to level up. So we brought in the best filmmakers and the best in class with all our department heads and our crew. Also, what's really cool about Jumanji is we have no constraints because it's a videogame. If you're lucky enough to have a movie as successful as the first Jumanji, you've got to raise the bar. You've got to raise your game. You've got to level up. So, I think we did - and not only that, but we also introduced new characters in the movie which I think audiences will really respond to this time around." Says the actor

Next Story : Madonna drinks a cup of urine after taking ice bath