Ezra Miller: I experience identity crisis to a massive extent 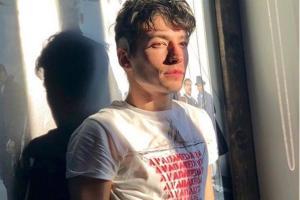 
Ezra Miller feels it is easy to lose the essence of one's own identity in showbiz. The "Fantastic Beasts" star admits he experiences an identity crisis, and says that being in the industry highlights the problem like a "terrifying pimple".

Miller is back as Credence Barebone, a young introverted man who is also an Obscurus, in "Fantastic Beasts: The Crimes of Grindelwald". Along with the magic and the beasts, the film is about Credence's journey to find his own identity, and struggling with it.

Asked if he has identity crisis over being an actor and living someone else's life on camera, Miller told IANS in an exclusive interview here: "I definitely experience that to a massive extent."

"I think being someone who professionally participates in the presentation of identity only exacerbates the problems with identification, which we all already have. It kind of brings it forward like a terrifying pimple," added the actor while looking at the ceiling of the posh hotel here.

"It reveals what people are going through with their identification to become so-called famous or celebrated celebrity. And I have experienced that. I went through my wild bouts of experience with that," he continued, before explaining his way of dealing with the problem.

"The key for me has been that the lesson in martial arts that I received... The open hand is more powerful. In terms of identity and belief, let go. Like your attachment to the things in the world.

Hailing from New Jersey, Miller has also been part of projects like "The Perks of Being a Wallflower", "Trainwreck", "Batman v Superman: Dawn of Justice" and "Suicide Squad".

He has been embracing the dark world with "Fantastic Beasts: The Crimes of Grindelwald" -- the Warner Bros Pictures project opened in India on November 16 -- is the DC Comics' new superhero The Flash and a queer icon for many across the world.

Do you think you have made an identity in Hollywood?

"Like it is useful to create a space for oneself as oneself, whatever that expression is at the given time. But from a different stand point, we can never satisfy the thirst of our spirit with a single confined identification."

Miller finds it "fascinating that we all naturally see to limit each other for the ease of our own minds to reduce everyone to the lowest common denominator".

"The label common denominator... It is unfortunate. It is probably the most unfortunate natural tendency. Human beings are cool because we can actually choose which natural tendencies we want to foster and bring to the surface of our perception and engagement. But we have just unfortunately chosen the worst ones," he said on a philosophical note.

Belief, he pointed out, is "very dangerous".

"It is such a volatile power... So strong... I think identity and belief are interlinked because people want to feel in this confusing mash up of subatomic particles, a clear and identifiable and understandable purpose and titular identity for existing.

"And there are lots of salesmen who are ready to give it to you for the right price, which usually involves your integrity, maybe your life, your safety, your soul."