Joaquin Phoenix almost set himself on fire before entering rehab

Joaquin Phoenix said he was drinking heavily and partying, post the success of the biopic "Walk The Line" 15 years ago, reports aceshowbiz.com. 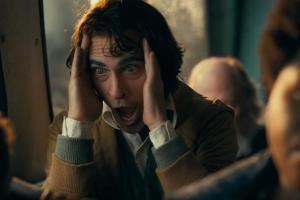 
Oscar-winning actor Joaquin Phoenix checked into a rehabilitation centre after director Werner Herzog highlighted his reckless ways following a near-death car crash. "I wasn't engaging with the world or myself in the way I wanted to. I was being an idiot, running around, drinking, trying to screw people, going to stupid clubs," the "Joker" star told GQ magazine.

Then, one night, after he crashed his car, he was about to light a cigarette. That was when German filmmaker Herzog intervened. "A German voice said, 'Just relax'," Phoenix said, recalling how the director pointed out the car was leaking petrol and he was seconds away from potentially lighting himself on fire.

Phoenix entered a treatment facility days later. Today, the actor says, he has no urge or desire to drink like he used to. "There are too many things I enjoy doing and I don't want to wake up feeling hungover. It's not a thing I fight against, it's just the way I live my life."

Next Story : Harry Potter star Rupert Grint is going to be a dad