Based on the characters created by Stan Lee and Jack Kirby in Marvel Comics, X-Men, directed by Bryan Singer, was released in 2000, and its success led to a series of sequels, prequels, and spin-offs. 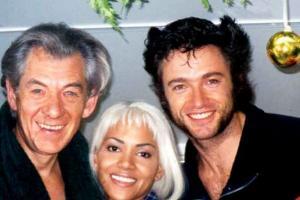 
The first X-Men film has turned 20 and cast members Ian McKellen, Hugh Jackman, Halle Berry and Famke Janssen marked the milestone year of the release of the mutant movie on social media.
Based on the characters created by Stan Lee and Jack Kirby in Marvel Comics, X-Men, directed by Bryan Singer, was released in 2000, and its success led to a series of sequels, prequels, and spin-offs, with the popularity of the series seeing a re-emergence of the superhero genre.

McKellen, who played Magneto in the films, shared a picture on Twitter where he could be seen making a call from a "working phone booth" with the date of the film's release visible on a large hoarding. "It was twenty years ago today, when there was still a working phone booth on Santa Monica Blvd and La Brea," he captioned it.

Jackman, who shot to international fame as the adamantium-clawed mutant Wolverine in his first Hollywood film X-Men, shared an old video from his initial training days fighting a Wolverine figurine. "When the studio asked if I could be in shape to play #Wolverine in 3 weeks, I might [have] over-promised. But wouldn't you have too? Happy Anniversary X-Men universe," the actor said.

Berry, who starred as the weather mutant Storm, shared a cartoon of herself with cast members as their characters — Wolverine, Jean Grey, played by Famke Janssen, and Cyclops, essayed by James Marsden. "#XMen20thAnniversary," she captioned the picture on her Instagram story.