This may be a content-driven film but the slo-mo pace, uneventful direction and dragged out story-telling craft leaves a lot to be desired. 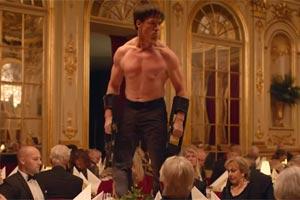 Swedish Director Ruben Östlund's Cannes top prize winner 'The Square' follows a Stockholm Museum's Chief art curator, Christian (Claes Bang), and some increasingly strange experiences which shape his views, reactions and interactions with the world around him. This may be a content driven film but the slo-mo pace, uneventful direction and dragged out story-telling craft leaves a lot to be desired though. It's a difficult experience to be with - especially since it drags out to an unviable, unsuitable 150 mins of runtime.

Christian's strange experiences are relative to the new exhibit 'The Square' which he and the gallery he represents is quite gung-ho about. The film plays like an increasingly bizarre farce. There are brief moments of levity within but largely the repetitive and long-drawn out posturing of the shocking puts paid to any great humbling experience. What was intended as an expose of the millennial mindset ends up as a peculiar non-generic representation of specific European behavior in society. So being able to feel empathy or understand where this is coming from, is going to be difficult for an audience underexposed to the European way of life.

Christian's encounter with the American journalist he sleeps with is quaintly hilarious no doubt but the sponsored dinner fracas seems over the top and his encounter with the persistent kid who refuses to let him get away with a slight to his character is very wearying to say the least. There's no rhythm in the pacing- as though hoping to keep the audience off their stride, the structuring of the narrative is unusual and there isn't much momentum propelling it.

Ruben Östlund's scripting doesn't allow for much integration between events so what you get is a stripped along story-telling that might seem meaningful to some and largely worthless to others. The experience thereof is interesting but not exactly illuminating or heartfelt.