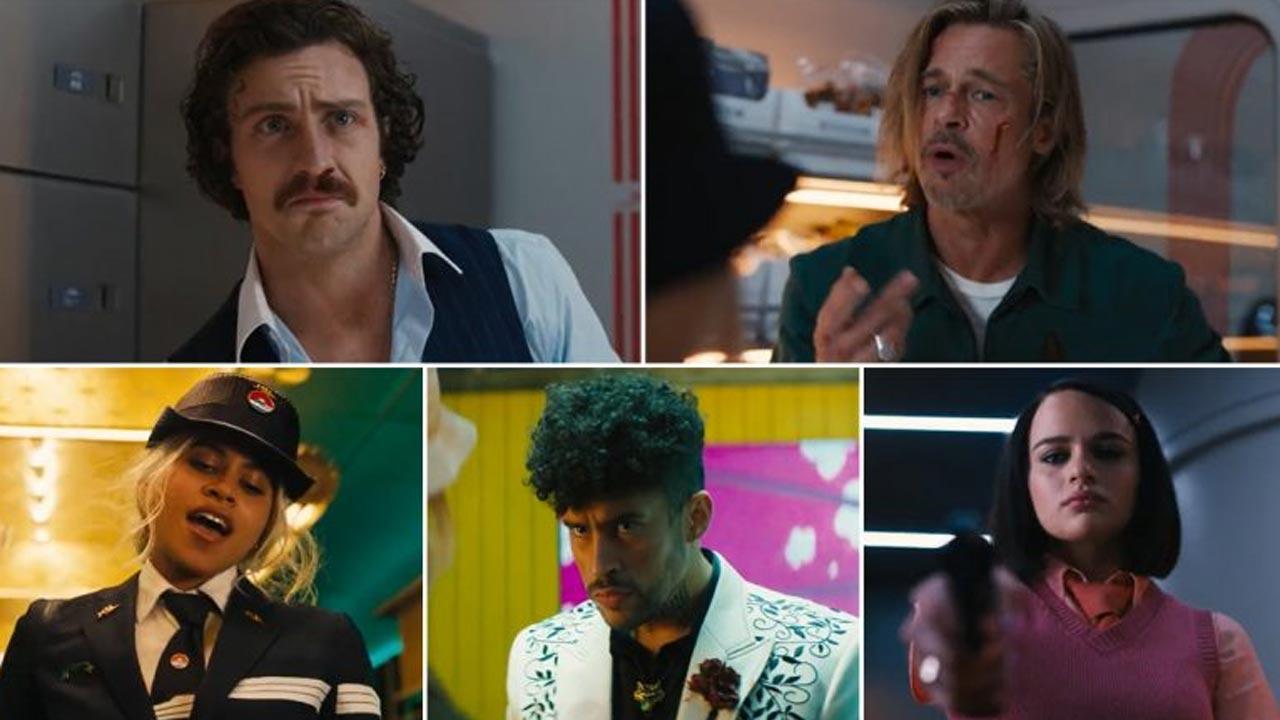 A still from Bullet Train

Director David Leitch’s cinema adaptation of Author Kōtarō Isaka’s ‘MariaBeetle,’ a 2010 Japanese dark comedic thriller novel which was translated into English by Sam Malissa as Bullet Train, gives an impression of a fast-paced slick actioner but that’s what it’s not. Far too many slow-mo sequences and several digressions into vacuous dialogue (that’s meant to be humorous) puncturing the stunt-action, depresses the overall enjoyment.

Ladybug (Brad Pitt), a has-been assassin who had to deal with anger issues, is called back into the fray by his handler. He is intent on putting the lessons of peace he has learnt in the interim, to test, but Fate has other plans, as his latest mission puts him on a collision course with lethal adversaries from around the globe. Everyone’s after a briefcase which contains the ransom paid for a kidnapping …but it’s not for us to reason why. We’re just meant to sit back and enjoy. That’s if you can keep your brain out of it!

All the adversaries including a British Assassin posing as a schoolgirl, Prince (Joey King), The Twins -Tangerine (Aaron Taylor-Johnson) and Lemon (Brian Tyre Henry) both  British assassins, Yuichi Kimura (Andrew Koji) a Japanese assassin, The Elder (Hiroyuki Sanada) another Japanese assassin, The White Death (Michael Shannon) the leader of a criminal organization, The Wolf  (Benito A Martínez Ocasio) a Mexican assassin with a vendetta against Ladybug, The Son (Logan Lerman) the White Death's son, Hornet (Zazie Beetz) an American assassin posing as a train crew member, Maria Beetle(Sandra Bullock) Ladybug's contact and handler are on the fastest track to abomination. The bullet train (Tohuku) heading from Tokyo to Kyoto, is just a means to that end – while the train doubles up on speed, the assassins play casual and lethal while taking breaks for meaningless conversation and unbecoming jest. It’s a sort of absurd theatre in captivity and is way too iffy to be anointed as unbridled fun.

The narrative has Guy Ritchie-style intros for the quirky weirdos and so-sos and Quentin Tarantino-style lethality but the cross-generic comedic action just doesn’t cut ice. The non-Asian actors playing ethnic Japanese characters also make it ard to swallow. The pop style with nostalgia-driven musical serenades (including Staying Alive in different languages) contributes the most to a likeable vibe. Brad Pitt’s insouciant yet charismatic presence coupled with sharply etched caricatures from the rest of the cast lend this film a distinctive comic-book feel. The canvas and ensuing riot resemble a live-action cartoon but it’s not fit for laughs. Screenwriter Zak Olkewicz though fails to deliver punch and excitement as the writing here goes insane with unmemorable, unendurable drivel. Director Leitch, who has collaborated with Brad Pitt before, has ‘Deadpool 2’ under his belt, yet is unable to use the ample resources and experience to make this a thrilling, exciting or funny, visual, adrenaline-gushing thriller. The pace keeps getting stunted by unviable streams of dialogue just when the momentum picks up. Even top-notch cinematography from Jonathan Sela and post-production spiff fail to mitigate that.