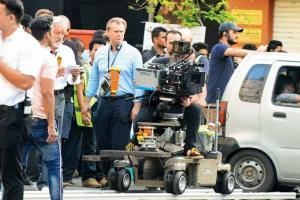 
For the suburban Bollywoodwallahs, a trip to Colaba is not a particularly pleasing thought. It's even less appealing when the shoot's call time is 5.30 am. A stylist friend asked if it was an Akshay Kumar shoot since he is infamous for his early morning call time. "Even better," was the reply as we dashed off to see filmmaker Christopher Nolan open his week-long schedule of Tenet in the city.

Sitting a lane away from Regal cinema, iconic pub Café Mondegar, known as much for its vintage jukebox as for its Bifteck Alla Supremo, was cordoned off with barricades, and manned by brawny security guards. A few inquiries among the 150-odd extras present at the scene helped us learn that the film's on-ground production unit had been in discussion with the café for permissions to function out of their premises. A well-informed hanger-on told us the café's partners were clear they wouldn't mess with their weekend loyalist crowd, and in turn, the unit agreed to shoot in the wee hours of Monday.

The action started at 4.30 am when an over 80-member crew, donning fluorescent green jackets, started setting up the market area of Colaba Causeway characterised by cheek-by-jowl stalls, to make it look like another busy morning in SoBo. The heavy equipment was stationed in the adjacent lane where kebab king Bademiya operates from. The place was packed with young extras fighting their sleep, waiting for filming to begin. Prodded on how much they were being paid for the day, one of them said, "Jitna har film ka milta hai!" 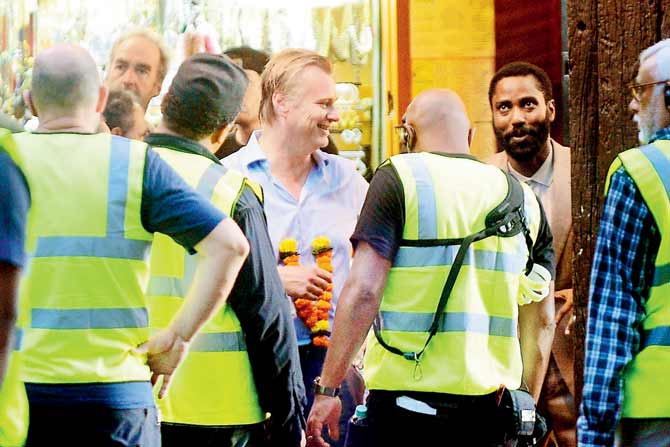 It was 7 am when Nolan appeared on the set. Dressed in a crisp blue shirt, wearing a marigold garland and a teeka, the filmmaker sipped on his coffee while giving instructions to cinematographer Hoyte van Hoytema and leading man John David Washington. The shot was fairly simple — Washington attends a call on his basic cellphone, dumps the box of the phone in a bin as he walks through the market place.

Two days in the city and it was evident that he had picked up a few words of Hindi as Nolan hollered, "Chaliye," marking the commencement of shoot. Well-known for being a rare filmmaker to still shoot on celluloid, he called for five takes of the scene before being satisfied. Amusingly, during one of the shots, an old lady unknowingly walked into the frame. The director graciously offered her directions before bidding her goodbye with a "Namaste". 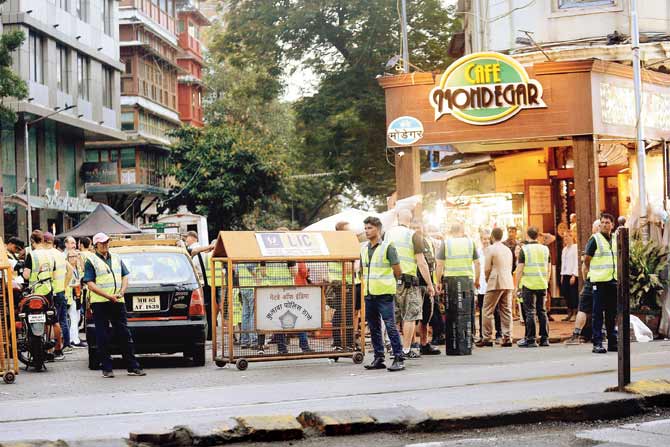 As the hours passed by, the lane outside got incredibly busy. Passersby curiously looked on, wondering which Khan is shooting amidst such razzmatazz. A police van showed up at the venue to ensure the shoot was not disrupted. One of the crew members told us, "The producers have procured permissions from the BMC. They will be shooting with Robert Pattinson at the Gateway Of India later during the day. Over the next few days, they will also be filming at the Royal Bombay Yacht Club and the backlane leading up to CST." The unit's next stop, we were told, is Ahmedabad. 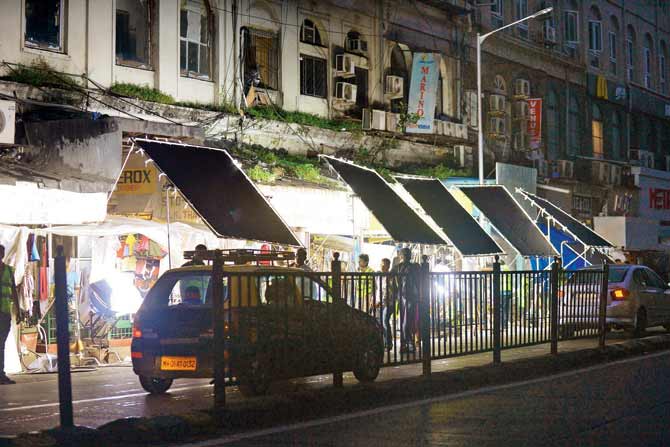 Colaba Causeway comes alive at 4.30 am for the shoot

The shoot was over by 8.30 am, three hours before the said closing time. We asked the hawker selling earrings if he had been paid anything for being part of the shoot; he smiled, suggesting that he was not. We returned with a pair of big hoops and memories of what a Nolan film set is all about. If we are lucky, we might just make to the film's final cut.

Next Story : Liam came to know of Miley's decision to split from social media