PC on Ma Anand Sheela biopic: Barry Levinson brought the movie to me 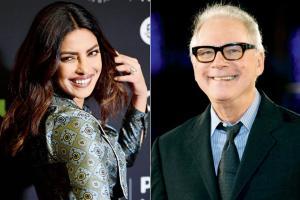 
Ever since Priyanka Chopra Jonas mentioned that she was developing a biopic on Ma Anand Sheela — controversial Indian godman Rajneesh Osho's closest aide — on The Ellen DeGeneres Show last month, she has held her cards close to her chest. Now, in a chat with mid-day, the actor-producer revealed that the project happened to her by destiny rather than design, at a time when she was scouting for powerful scripts.

"I have to credit director Barry Levinson for bringing this movie to me. He will be directing the project. He and his producers have been researching on this subject and developing it for the last few years. He approached me to develop it with him," said Chopra.

The film will reportedly chronicle Ma Sheela's transformation from a fine arts student in India to the right hand person of a godman, who is eventually convicted of multiple attempted murders. The actor further added that it will be a while before the project goes on floors, given that the subject demands exhaustive research.

"The Ma Sheela biopic is way in the future and will take some time to fructify. I'm doing a few other things in the meantime, which includes a YouTube series and writing a book."