Sylvester Stallone shared a dashing picture of the two on his official handle showing both in Black, all suited up. 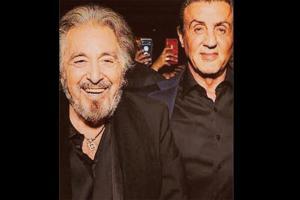 
Veteran actor Sylvester Stallone extended his warm wishes to the Hollywood superstar Al Pacino who celebrated his birthday on Saturday. The 'Rocky' legend greeted the 80-year-old turned icon on Saturday on Instagram.

The 'Rambo' actor shared a dashing picture of the two on his official handle showing both in Black, all suited up. Taking it to the captions, the 73-year-old wrote: "A very very happy birthday to the brilliant Al Pacino !!!!"

A very very happy birthday to the brilliant Al Pacino !!!!

Scores of comments followed the post with many of the icon's fans extending birthday wishes. Having an impressive array of films under his belt, Pacino has been a part of classics like the 'Godfather' series, 'Scarface', 'Serpico', 'The Devil's Advocate', and many more during a career spanning more than five decades.

Regarded as one of cinema's greatest and most influential actors, the legendary actor received the Academy Award for his character in the 1992 released movie 'Scent of a Woman'

Recently, the superstar also starred in ace filmmaker Quentin Tarantino's 'Once Upon A Time... In Hollywood', along with the other star cast -- Leonardo DiCaprio, Brad Pitt, and Margot Robbie