This kind gesture of Vishal Parekh will melt your heart; know more!

Vishal Parekh aka Vishal DOP is a social media sensation who was recently seen in a Gujarati single titled 'Bhai No Mel Padi Gayo' alongside Kinjal Dave. 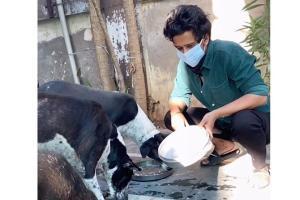 
Vishal Parekh aka Vishal DOP is a social media sensation who was recently seen in a Gujarati single titled 'Bhai No Mel Padi Gayo' alongside Kinjal Dave. The young lad is currently making the most out of his self-quarantine as he is prepping up for his upcoming web series and working on his theatre acts.

Recently, a video of Vishal went Viral on social media which showed the actor feeding animals outside his house. While most of the celebs are seen making hefty donations, this social media star made a generous and kind move by feeding the innocent creatures who were starving due to the pandemic. The 20-year-old actor has been religiously following the act and has urged people to do the same.

The actor enjoys a huge fanbase on social media. Vishal is best known for his unique content creation, a proof of which is seen on his Instagram where the actor keeps engaging with his fans in different ways.

Vishal is currently working on a yet to be announced web series and is also gearing up for his own YouTube channel.