To mark the occasion, Arun Gawli visited the real Dagadi Chawl with the film’s team and unveiled the poster and trailer in the heart of the movie’s inspiration 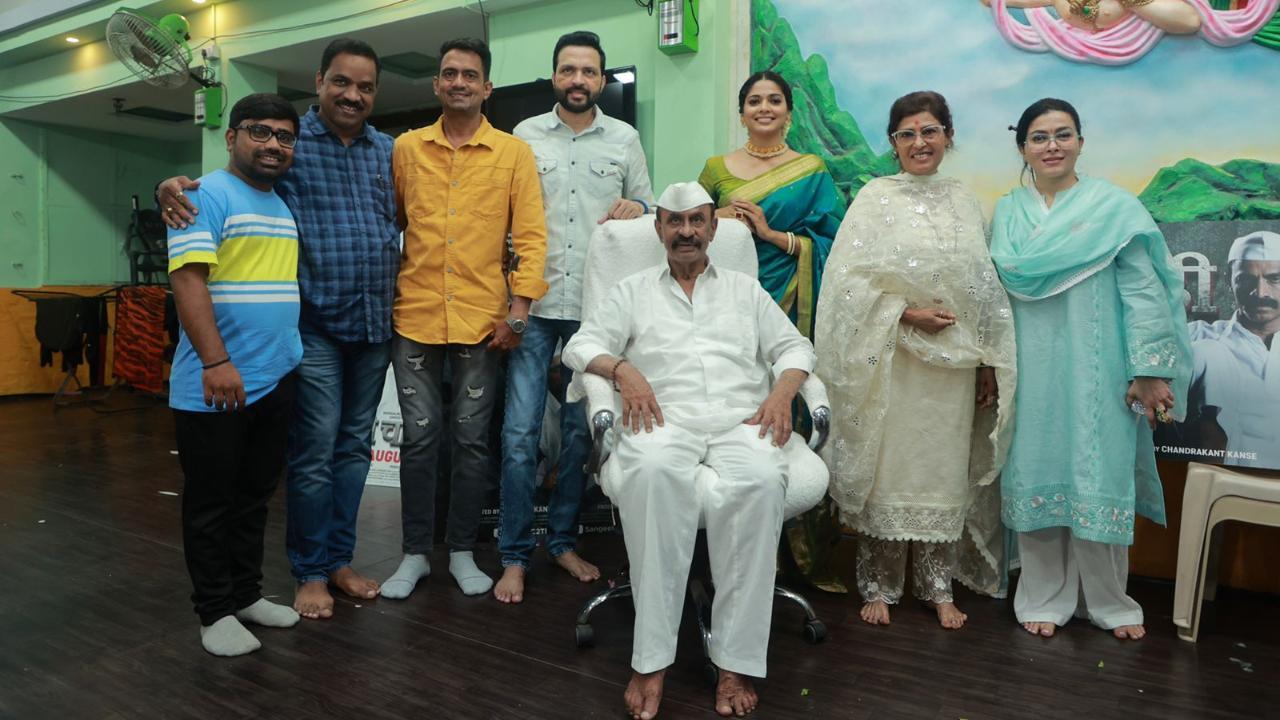 Arun Gawli with team of the film/ PR


The trailer release of 'Dagadi Chawl 2', a sequel of the 2015 blockbuster inspired by the life of Arun Gawli created an uproar among fans who are eagerly awaiting the release of the film.

To mark the occasion, Arun Gawli visited the real Dagadi Chawl with the film’s team and unveiled the poster and trailer in the heart of the movie’s inspiration. The surreal experience was dedicated to fans who have adored the film and are waiting eagerly for Dagadi Chawl 2’s release. The trailer gives a glimpse into a different kind of relationship between Surya and Daddy. Surya who was once Daddy's right-hand man now hates him and is seen living a simple life with his family out of the clutches of gang war. The movie raises many questions about their relationship turning bitter and fans will get a chance to watch what happened between then and now This time round politics intertwined with gang war will define the storyline.

Directed by Chandrakant Kanse, 'Dagadi Chawl 2' stars Ankush Chaudhari, Makarand Deshpande, and Pooja Sawant in key roles. The hot-blooded, heroic Surya played by Ankush Chaudhari, and the heavy-weight, kingpin Daddy essayed by Makarand Despande modelled on one of the biggest names of yesteryear Mumbai’s gangs Arun Gawli are ready to make a comeback with their spine-chilling characters. Doubling up on the pulsating entertainment, Dagadi Chawl 2 looks like an out-and-out blockbuster. The trailer grips and completely blows minds with stunning sequences, dialogues, and great performances.  Bollywood actress Daisy Shah has also made her debut in Marathi cinema with the song ‘Raghu Pinjryat Ala’ in the movie, which has taken social media by storm since its release.

Speaking on the launch of the film’s trailer Makarand Deshpande who plays Daddy commented “My focus was to do justice to the character of Daddy all over again while bringing a new side to him on the table as his life has progressed from the last film. We were so blessed to be celebrated for the first film, that the expectations now are sky high. Seeing the trailer, audiences will realise we have left no stone unturned in bringing an even better experience to them”

Director Chandrakant Kanse shared “While we were confident we had made a great film, Dagadi Chawl went on to become an unimaginable hit in the history of Marathi Cinema. We were very excited to revive fans' excitement once again with an ace entertainer. The trailer is sure to leave fans restless for the film’s release”

Producer Sangeeta Ahir shared “We decided to make a sequel because of the overwhelming audience response to Dagdi Chawl”. Every team involved in the making of this film has put in 200% to not only recreate the electrifying experience of the first film but take it up by several notches.”

The film is inspired by the 80s and early 90s world of crime and gangs and the infamous Dagadi Chawl of Mumbai which is home to Arun Gawli. The tryst of Surya and Daddy became an instant hit with audiences who could not get enough of the film.  Produced by MangalMurti Films and Sangeeta Ahir and Ratkanant Jagtap as the executive producer, Dagadi Chawl 2 will release on August 19, 2022, in theatres.