Saaho director: Only fair that we shoot biggest actioner in IMAX 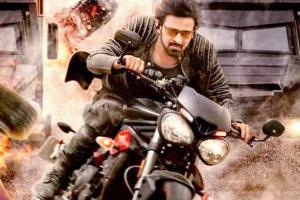 A still from Saaho teaser


Saaho's teaser is indication enough that the makers have left no stone unturned in making the Prabhas-starrer a visual spectacle. Given the high-octane action sequences and the elaborate VFX at play, director Sujeeth says that he knew early on that only original IMAX cameras would do justice to the entertainer.

While many filmmakers digitally remaster their movies for the IMAX screen, the director chose to shoot the actioner in this format, thus making it one of the few Hindi films with the distinction. "Saaho is one of the biggest action entertainers and it was only fair that we shoot it with high-end cameras and equipment. Granted the huge production budget that we had and the countless hours of work put in by the crew, it's only fitting that the audience sees the action sequences in the best visual space possible. We are glad to present the movie in IMAX format," says the director.

The trailer will be released on an IMAX screen to provide the audience a sneak peek into the extravaganza.

Also read: Prabhas releases new poster of Saaho; trailer to be out on August 10