Sachin Pilgaonkar is excited for his next Marathi venture, Ashi Hi Aashiqui with Abhinay Berde and Hemal Ingle. In an exclusive interview with mid-day.com, the three of them speak about the film and the rapport they share with each other 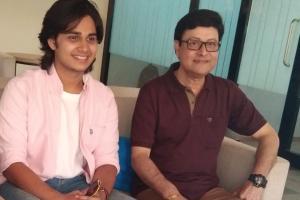 
For decades, the hit pair of Sachin Pilgaonkar and Laxmikant Berde entertained the audience with their acting chops and love. The two shared a relationship beyond blood and words, and one can see the pure essence of it through Abhinay Berde - son of Late actor, Laxmikant Berde. Abhinay is all set for his second Marathi film, Ashi Hi Aashiqui with Hemal Ingle under the guidance of his 'Kaka' aka director, Sachin Pilagaonkar. For its first, the Nadiya Ke Paar actor has composed music for a film and is very excited to introduce Abhinay and Hemal as his own children. This love story by Sachin Pilgaonkar is all set to attract the audience in its love on March 01, 2019. In an exclusive interview with mid-day.com, Sachin, Abhinay, and Hemal share their experience working on this film and other aspects.

Ashi hi Aashiqui, tell us something about your experience of working with Sachin Pilgaonkar?
Abhinay: We had a great time and learned a lot from sir. It's a film, which involves a lot of hard work, love, and talent altogether. Both Hemal Ingle and I were quite raw while shooting this film.

The film's title is quite appealing, what does it have in store for the audience?
Hemal: Sachin sir's films have a USP, which is that everyone can come and watch this film. There isn't any particular target audience. I have grown up watching his films and I can assure that anybody and everybody can watch Ashi Hi Aashiqui. It will always have a fun element to it and this is the first time that he's done a pure love story. After watching this film, people will say that if you've got to love, you've got to love in this way.

What kind of a rapport do you'll share with each other and did that make it easier to shoot the film?
Hemal: When I first met him, it was a fangirl rapport and I only spoke about how I saw him on Nach Baliye (Dance reality show) and I loved the way he and Supriya Pilagonkar (his wife) danced. I can't define this relationship in one word. It was a father-daughter, director-actor and it was also a friendly relationship. He can sense what a person requires because of years and years' experience and accordingly he'll either be a friend or a father figure to you.

Abhinay: I share a very different kind of a relationship with him because he has seen me since I was a baby. He is a very dear friend of my father (Late. Laxmikant Berde) and they shared a brotherly bond. I would call Sachin sir 'Kaka' before shooting this film. So, once I got on board, I started calling him 'Sir', and then it was a teacher-student relationship, which accordingly translated to father-son, director-actor relationship. Whenever we are not shooting, we are good friends and talk over a drink because he's young at heart. He's got many interesting things to say and you learn a lot from him.

Your relationship with Laxmikant Berde goes way back and you'll have done many films together. Now, years later, how does it feel to direct your best friend's son?
Sachin: It's a feeling of pride to be associated with Lakshaa (Laxmikant) and never did I think on seeing this child as a tiny tot that I would be directing him, and he would be the hero of my film. When this was supposed to happen, it was a pleasant thought even before I started to work with him. The Berde-Pilgaonkar connect has again started and it is here to stay. I had a fabulous experience working with him not only because of what he has in his genes but also the kind of person he is. The thing that I got to see when I saw his first film (Ti Sadhya Kaay Karte) was that he has his own style and is not trying to become Laxmikant, which goes in his favour. I always get attracted to those who try to build their own path and he's one of them. I'm sure that even if Laxmikant had seen his performance, he would have been mighty proud of Abhinay.

How was your experience with the youngsters?
Sachin: Hemal was raw and even I was raw because this is my first pure love story. All this while I have only made comedy films, which have been successful enough. Here, the story-telling is different; here it is a pure love story. I also got the opportunity to give the entire music to this film as a composer. So, there was a lot of rawness for me to explore. Therefore, we all were on the same page. I am a newcomer as well, and that's how I could make a film with these two. The whole film is on the shoulders of these two young kids and they have taken up this responsibility very strongly and they have proved me right.

Do you feel responsible for Abhinay and Hemal's career?
Sachin: Why only hereafter? Why not before this? Irrespective of whether we are working together or not, I feel responsible for both of them. Our rapport is not connected to only one film. I know Abhinay will never have any inhibition before picking up the phone and asking me about anything, I would be there and vice versa. I can also take his advice because he's a matured guy and he's got his heads on his shoulders. There are things that he and Hemal might know better, she has even done law (laughs).

The era of web series has arrived. Are you open to directing the series?
It's the future of entertainment and we should welcome and accept the change positively; having said that it does not mean that the film era is going to subside. I have done films from childhood and the biggest revolution that I have faced is from negatives to digital, before that it was sound – from optical to magnetic and from magnetic to digital. People had to accept the revolution and adapt accordingly. Likewise, this is another revolution and I think it's here to stay for a long time but it may not be as attractive and lucrative as it is today, then I would want to see what will be the attraction for entertainment. Films will always have an upper hand on web shows. Let us wait for another three years and then we'll talk about web series.

About acting…
I was the first person to enter into the medium of web series in 2016 through Sex Chat with Pappu & Papa. In the month of April, my new web series, titled, City of Dreams will release by Nagesh Kukunoor, in which, I play the Chief Minister of Maharashtra. It is a political thriller.

Would you be open to foraying into web series?
Abhinay: I would love to but I would be very selective about it. If it is Nagesh Kukunoor or Anurag Kashyap, I will definitely do but I can't do a web show, which is easily available on social media. I want people to pay to watch me. I can't be easily available to everyone, otherwise, people won't find any attraction to come to the cinema hall and pay Rs. 250 to watch me on the 70 mm. In the Marathi film industry, I think, today's generation should maintain that exclusivity. They shouldn't appear everywhere at every event they are being called for.

We saw you and your actor-wife Supriya Pilgaonkar doing a cameo in Hichki. When do we again get to see you together on the screens?
Sachin: Let'see! Right now our focus is Ashi Hi Aashiqui as she is also the producer of this film. We have always complimented each other. After I got my better half in my life, fortunately, I have never looked back. Even now, I wish to do the same.