After a harsh verdict, where everyone except Romil was nominated because of Shivashishu00c3u0083u00c2u00a2u00c3u0082u00c2u0080u00c3u0082u00c2u0099s arrogance, Bigg Boss announced a task that the contestant could use to their advantage and save themselves 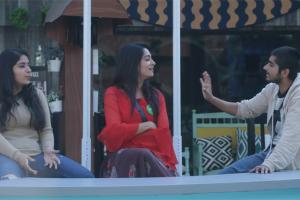 After a harsh verdict, where everyone except Romil was nominated because of Shivashish’s arrogance, Bigg Boss announced a task that the contestant could use to their advantage and save themselves.

#SurbhiRana, #DeepakThakur and @ms_dipika are about to fight for their seat to be safe from the nominations! Who will succeed in grabbing this chance? Find out tonight at 9 PM. #BiggBoss12 #BB12 pic.twitter.com/lIlrxOhgvT

As a part of this task, a safe zone was made in the garden area with only 3 chairs and 3 flagposts. Dipika, Surbhi and Deepak were the first ones to enter the safe zone. They had to wear safe badges and the flags with their name and picture was hosted on the flag posts. After every gong they had to mutually decide to leave the safe zone and give the spot to someone they thought deserved it the most.

But even after leaving the spot they were allowed to come in if someone else took their name and surrendered their spot. The entire house was seen strategizing and convincing each other to gain a spot in the safe zone.

#SomiKhan and @imrohitsuchanti have some interesting ideas up their sleeves in order to trouble #DeepakThakur! Watch this drama unfold tonight at 9 PM. #BiggBoss12 #BB12 pic.twitter.com/i8wr897JV8

A lot of disagreement was seen amongst the contestants. This task came as blessing in disguise because it led to more groups being formed in the house and pitted contestants against each other.

Well, it's definitely true when they say, If you can't beat them, join them. Will the contestants use this power to their benefit or fail miserably in this task as well?