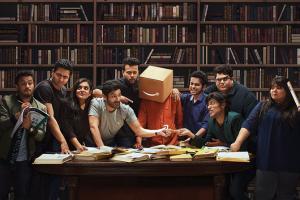 
Amazon today announced it has greenlit Season two of the Prime Original series, Comicstaan, just weeks after its worldwide premiere on July 13, 2018. The series, within days, became the most streamed Prime Original series in India garnering rave reviews from customers across the country.

Created in association with Only Much Louder (OML), Comicstaan season two will feature top comic Zakir Khan in addition to Tanmay Bhat, Biswa Kalyan Rath, Kanan Gill, Kenny Sebastian, Kaneez Surka, Sumukhi Suresh and Abish Mathew who will be returning for the season. The hunt for India's next big comic sensation will soon begin as Comicstaan Season two will return to Amazon Prime Video in 2019.

Comicstaan Season one, a nine-episode Prime Original Series, where ten contestants from across the country are chosen to compete for the winning title and mentored by the best comedians in India, is currently available to stream exclusively on Amazon Prime Video with new episodes releasing every Friday.

Vijay Subramaniam, Director and Head, Content, Amazon Prime Video India said, "We are delighted to bring a second season of this exceptional series that discovers and mentors new comedy talent in India. The first season of Comicstaan won the hearts of many across the country and broke all records for the most watched Amazon Prime Original series on Prime Video since launch. Our customers' response to the series is the key factor in our enthusiasm to bring our audience another season – with indeed a fresh dose of laughter, jokes and even more fresh comic talent."

Dhruv Sheth, Managing Partner, Only Much Louder (OML), said, "Comicstaan was one of the most exciting projects for us in the past year and we are extremely thrilled and elated that it has been renewed for a second season so early to the launch of the first. We are going bigger and better in Season two."

Here's some top data on Comicstaan season one performance:
• Comicstaan broke a record to become the most watched Prime Original series ever on Amazon Prime Video in India
• Many customers were among the first to finish watching the first four episodes of Comicstaan in their entirety within 3.5 hours of its launch
• Customers from across the length and breadth of the country including Tier II/Tier III cities like Lucknow, Ludhiana, Jamshedpur, Ahmedabad, Kochi, etc. loved watching Comicstaan

Next Story : I am remaking Swabhimaan, says Rohit Roy