With PA-Gals returning for a second season, director Nidhi Bisht on how the semi-autobiographical show helped her find a foothold in the industry 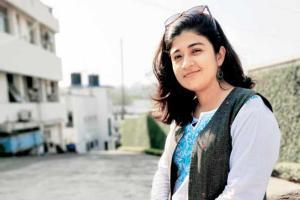 
A year since her directorial debut PA-Gals struck a chord with the youngsters, Nidhi Bisht stands vindicated. After all, she had quit her career in law to pursue her directorial dream. The web series that revolves around three flatmates and their everyday struggles has returned with its second season.

When it came to scripting her first show, Bisht says she didn't have to look too far for inspiration. "When I first moved to Mumbai, I was living with six other girls. I thought our experiences would make for great content. In fact, I had pitched the concept of PA-Gals to TVF in 2012. It was called Chikipedia then. We had even shot the pilot episode. However, Rowdies had launched at the same time and gone viral. In comparison, our episode seemed weak. So we decided to put a pin in it," she says.

While the pilot season had Ronjini Chakraborty, Srishti Shrivastava and Prajakta Kohli play the central characters of Sonali, Mamta and Disha respectively, the latest instalment sees Kohli make way for a new flatmate, Wiki, played by Akanksha Thakur. "We couldn't get Prajakta's dates, and we needed to begin the second season soon. So, we rewrote two episodes. The season starts with Prajakta leaving and a new flatmate entering. Because it's a mini-series, each day offers a new story. So, we can always bring Prajakta back."

Personally invested in the journey of every character, Bisht says she has infused her quirks into each part. "I am organised and am a bit OCD [Obsessive Compulsive Disorder] like Sonali. I can also identify with Mamta's goofy ways. Disha and Wiki's laid-back nature are aspirational for me; I just can't be that laid-back in life."