Adhish Khanna on working with Kiara Advani in Guilty 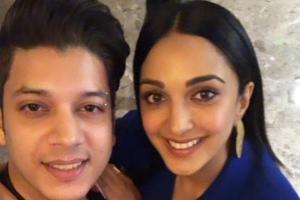 
The journey of an actor comes with a lot of ups and downs. The struggle is the consistent part every actor has to go through and Adhish Khanna's journey has also not been an easy one. He began his career in the industry with TV commercials and soon he got the title of an 'Ad King'. With having done around 100 ads in his career, he also featured in Red Chillies Entertainment's film 'Always Kabhi Kabhi' (2011). The actor then featured in '24' (2013), a TV series where he played Anil Kapoor's on-screen son. However, during that time Khanna had to juggle between Mumbai and Delhi due to family reasons but now he is back in the news with his latest Netflix film 'Guilty' starring Kiara Advani.

Adhish Khanna has got a prominent role in the film and he said that he loved the role when the film's casting director Deepna approached him to play the character. "Playing a harami character on-screen comes naturally to me. Sharing screen space with Kiara Advani was absolute fun and she is a very fantastic actress. I have always admired her works", he said. Besides this, the actor had to undergo a change in his look. "I had to get a few piercings done for the film. It was kinda painful but I am liking the new look which I got for the film. The film took long to shoot and it became difficult when I had to get a different hairstyle with different hair colour. But I must say it was a really good experience", he added.

Apart from this, Adhish was also all praises for the film's director Ruchi Narain. Calling her fantastic in her art, the actor said that Ruchi gives every actor their own space and let them improvise their work. His latest film 'Guilty' is streaming on Netflix from March 6, 2020. When asked about his future projects, Adhish Khanna said, "I am currently reading a few scripts and going through them. I will talk about it once I get a good script and a good role. Though I would love to do a web series now." Well, this talented actor has surely given his best in 'Guilty' and we wish him all the best for his future projects.

Next Story : Karisma Kapoor: Mentalhood is a shout-out to all mothers