Anand Tiwari on Bandish Bandits: Shooting something for so long was new

Actor and filmmaker Anand Tiwari speaks about his upcoming show, Bandish Bandits, the experience of directing again, and what was new this time around! 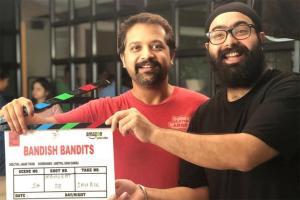 
They say love and music have no language, and that's precisely why a pop star and a classical singer fall in love in the upcoming show, Bandish Bandits. All set to air on Amazon Prime Video today on August 4, the director, Anand Tiwari, talks about it and how it was directing this time.

In an interview with The Indian Express, Tiwari first spoke about the idea behind making a series on music. He said, "Amrit (Amritpal Singh Bindra, producer) and I have been making different kind of content for the past 5-6 years. When we looked at the content that is being created, there wasn't something like Bandish Bandits. So we thought why not create something that deals with the youth of today trying to express through art. Music is the most transcending of art forms."

Talking of music, the series also marks the debut of Shankar-Ehsaan-Loy, and he even talked about bringing the trio on board and stated, "We couldn't think of anyone else, who could've done something as magnanimous, as deeply traditional and as deeply today. They are like an ocean of knowledge as far as music is concerned. When we approached them, they were so moved by the piece. I don't know if they knew what they were saying yes to, given the ridiculous amount of work they have put in."

Tiwari also directed Love Per Square Foot, so has he learned anything new about direction this time around? This is what he said, "My understanding of direction has increased after Bandish Bandits. Also I directed something that was heavily written by someone else. That's a new experience for me. That made me understand direction a lot more. Shooting something for this long with so many episodes was also new to me."