As season two of Humorously Yours wins praise, leads Vipul Goyal and Rasika Dugal on the perks and perils of developing a comedy 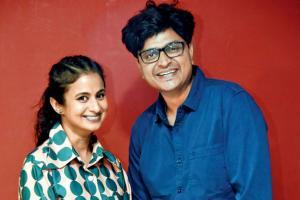 
We knew we were in for a laugh riot when stand-up comic Vipul Goyal and actor Rasika Dugal visited the mid-day office ahead of the release of the second season of TVF's Humorously Yours. Their banter, mirroring that of their on-screen avatars, was peppered with witty one-liners as the two opened up on the latest edition and how the show borrows from their lives.

After the success of the first season, did you feel burdened by the expectations surrounding the second edition?
Goyal: While working on the show, we didn't feel any pressure. A show like Game Of Thrones comes with immense pressure, and even they couldn't meet the audience's expectations. We wanted to stay true to the characters and didn't want to hurry the process to simply feed the audience's hunger. We took two years to create the next part.

How has your character Kavya evolved?
Dugal: She doesn't have much to do beyond this relationship. We will possibly explore more about her in the third season.
Goyal: We tried to explore the [track of] Kavya's professional life, but couldn't do justice to it at the writing table.
Dugal: This is a carrot they've been throwing at me since season one [laughs].

How long did it take to develop the material?
Goyal: Around eight to nine months. My character's graph runs parallel to my real life. I had to incorporate the changes in my personal life, in the series. We included everything — the popularity, success, female attention — that has happened to me post season one.
Dugal: Did you subtly add 'female attention'?
Goyal: It is part of the series.

How has your life changed since the first season?
Goyal: On the professional front, tickets sales increased, and I started getting more audition calls. On a personal level, it led to an interesting conflict between my wife and me, which I have incorporated in the show. All the ticketed gigs happen over weekends. My wife has her days-off then, and unfortunately, I am travelling across cities on those days. So, we made a conscious decision that I will perform on alternate weekends.

While you've been part of several acclaimed projects, do you think you've been stereotyped as an indie actor?
Dugal: I have mostly attempted the drama genre rather than slice-of-life shows, which is why Humorously Yours was so appealing. It was like a vacation after Mirzapur and Delhi Crime.
Goyal: Maybe you should try Housefull 4 and the next part of Grand Masti.

Next Story : Jennifer Winget on Code M: Was sold on the concept in the first meeting